29 March 2019 at 11PM (GMT), marks a key moment in time, connecting a period of the unforeseeable tumult called Brexit, and the collaborative project State of Unsettlement. Brexit is representing a lingering challenge for Europe and the United Kingdom, and became the start of this research collective where British and Dutch makers and researchers joined forces in the backyard of Brexit. 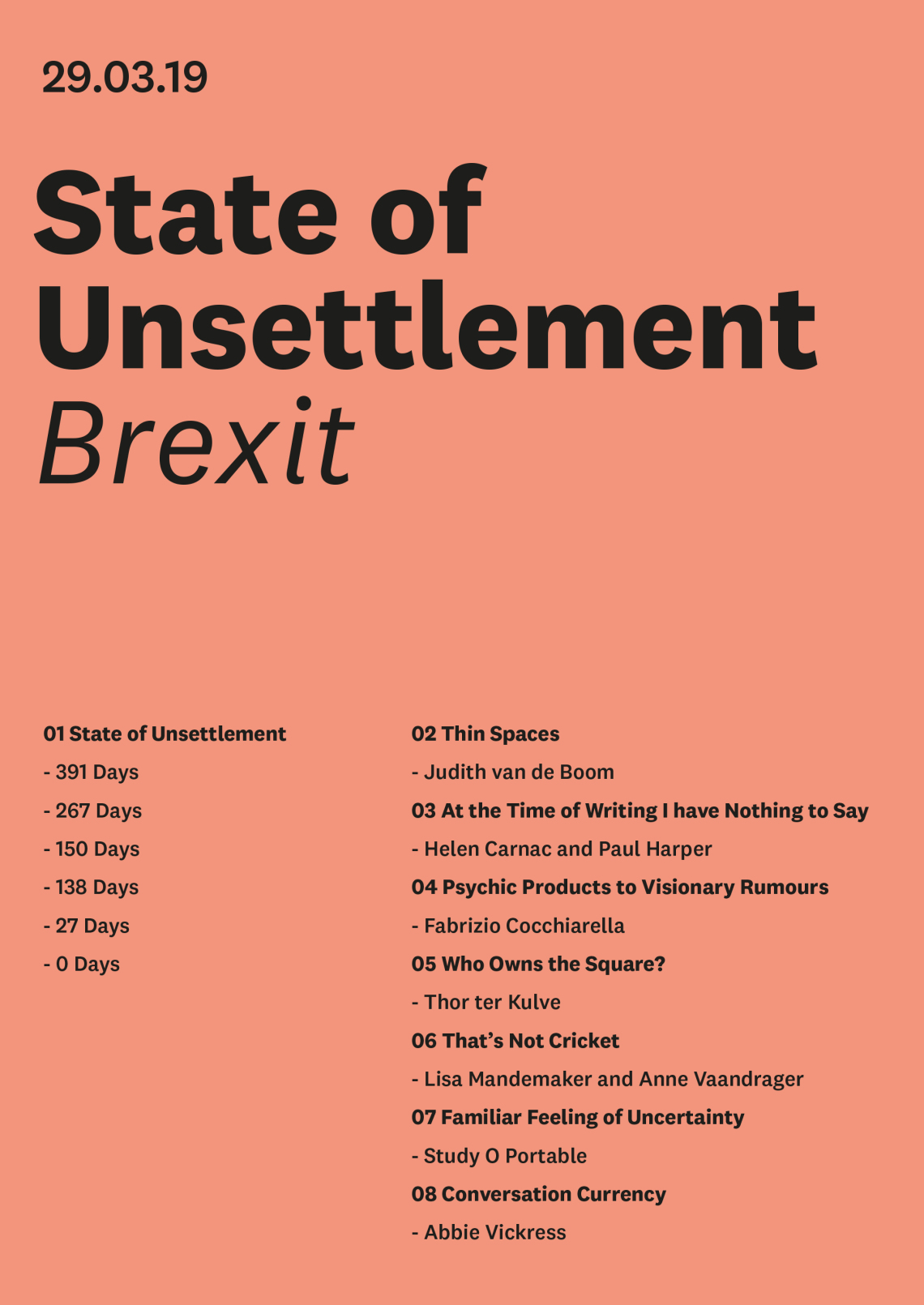 On the day of Brexit we share with you this first publication of State of Unsettlement 29.03.19. It is a captured moment of work in progress for the collective, featuring documentation of our journey thus far through Brexit. It contains a collection of eight project proposals by various creatives and researchers, all with the ambition to use our creative practices to contribute towards or facilitate alternative views on our current social climate.

We believe in times of uncertainty and fragile negotiations, creative practices should influence a more positive climate and ecology, shifting current perceptions on society, building experimental safe-spaces where we can raise questions, explore the alternate and share dialogue. State of Unsettlement created a space to explore forms of enacting for makers, to create individual and collaborative work that is embedded in an artistic and critical vision on political friction, giving voice and agency to the collaborative act, the shared thought and open discussion.

State of Unsettlement underlines the importance of uncertainty as a positive strength and urgency in making and researching, producing a mentality of openness, flexibility and collaborative nature, all in order to rethink the way we view and interact with our surroundings.

With this publication, a new chapter begins. With thanks to all contributing.

The project State of Unsettlement is set up as a design-research platform to explore and discuss the political climate and the impact of design in times of Brexit. Made possible by Creative Industries Fund NL, initiators and designers Anne Vaandrager, Lisa Mandemaker and Judith van den Boom invite makers, designers and researchers from the British and Dutch practice to investigate the Brexit negotiations. They aim to explore a connected and collaborative inventiveness and resourcefulness to the concept of nationhood and citizenship, rather than highlighting the current geographic division between The Netherlands and United Kingdom. State of Unsettlement creates a ground to stimulate international collaboration, leading towards new forms of ecologies and interpretations of living and working in uncertain times.