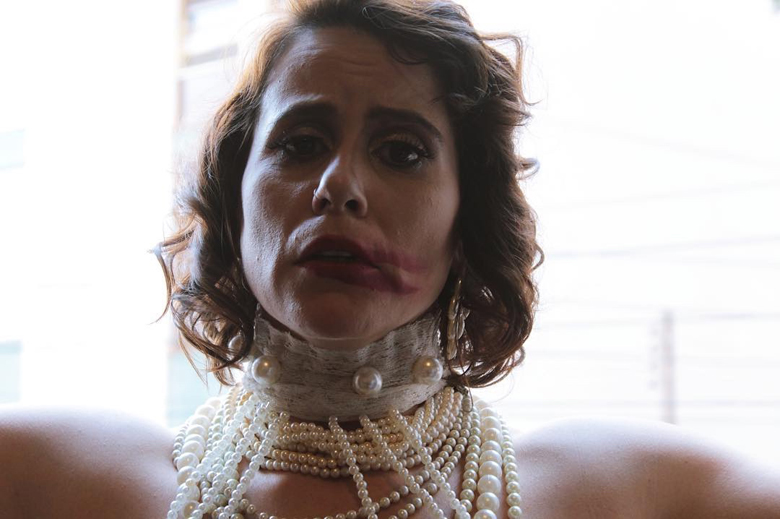 It is a Sunday afternoon in early September, 2017. I am sitting in the library of Sesc Araraquara (Brazil), reading a few pages of a book that I no longer recall. The overall silence is suddenly interrupted by mumbling, whispering, and pointing. I see this short-haired woman walking towards us. She wears a 1950s American style skirt, a blouse, a pearl necklace and earrings, red lipstick, a black purse, heels, and mascara. Her presence takes over and the sound of her steps cuts across the library as she walks slowly and carefully, balancing a book over her head. A step or two further, and the book crashes to the ground. Post-it notes fly from its pages and scatter across the floor. I come closer and succeed in reading some of them while collecting a few off the floor in a convivial gesture: “Batom Vermelho é coisa de mulher que não presta” [“Red lipstick is not a woman’s thing”]; “Você é louca” [“You are insane”]; “Estudar pra que? Vai esquentar meu jantar!” [“Study for what? Go heat up my dinner!”]. As I look up to hand the notes back to the woman, she is staring at me, holding up one of the notes for me to read. Not a blink in her eyes, not a hint of a smile. After a few seconds, her lips silently move—“Obrigada” [“Thank you”]. She puts the notes back in the book, stands up, shakes her body off, improvise a few dance steps, balances the book over her head, and starts walking all over again. I am left in a state of uneasiness and wonder about the words and the piercing gaze that I had just encountered—Who was that woman? 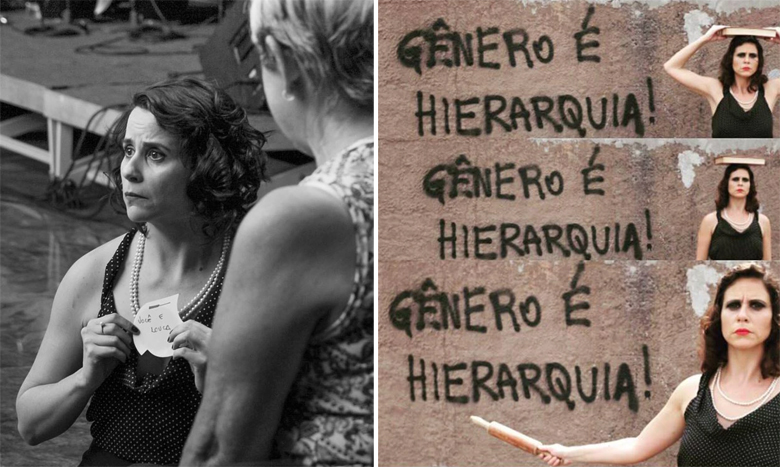 That woman is “Ella, a Comportada” [“The Well-Behaved Ella”], Georgia Palomino’s creation born out of her own urge to “understand what was happening to [herself] as a woman,” as she revealed to me in an audio interview (April, 2019). What was a personal urge to the Brazil based performer and dancer in 2016 soon became a persona which has since helped her understand and deconstruct essentialist concepts and categories of gender, sexuality, identity politics, and conflict mostly related to the ones who call themselves or are called women within Brazilian contemporary society. As Palomino explains, “toda a pegada dela é retrô, até o jeito dela se vestir. Tudo isso foi muito bem pensado. Esta mulher, retrô, que era a minha vó, a minha mãe, ela ainda está aqui. As opressões que elas passaram a gente passa ainda hoje. Então a ideia é garimpar o que aconteceu lá e mostrar que ‘olha, isto aqui ainda é assim, ainda existe” [“She is all retrô, including the way she dresses. All of this was well thought out. This retrô woman, who was once my grandmother, my mother, is still here. The oppressions they went through, we still go through. So the idea is to garner what happened there and say ‘look, this is still here, it still exists].’” Though retrô (the Brazilian Portuguese slang to refer to an old-fashioned style, idea, or behavior that is in vogue), Ella is a mobile and timeless compound much as she is a political vessel: besides being inspired by the activist and political roles played by a handful of historical women, Ella was conceptualized to rescue, and give voice and agency to any ordinary woman she encounters and incorporates and she walks by—mothers, daughters, cis, trans, homosexuals, abused, despised, marginalized, invisible, disparaged.

Ella also breaks genre barriers. As a highly-improvisational and cross-genre urban intervention, she encourages and mobilizes passers-by to intervene by collecting a post-it note from the floor and interacting with her, reconsidering therein the place of the theatre, dance, performance, photography, graffiti, and the streets themselves for artistic creation and reception. Inevitably, Palomino’s strong dose of improvisation, invitation, and feminist assertiveness gives way to an often unsettling and collaborative political interaction with others, bringing back into play feminist sociocultural, urban activism, and agency. 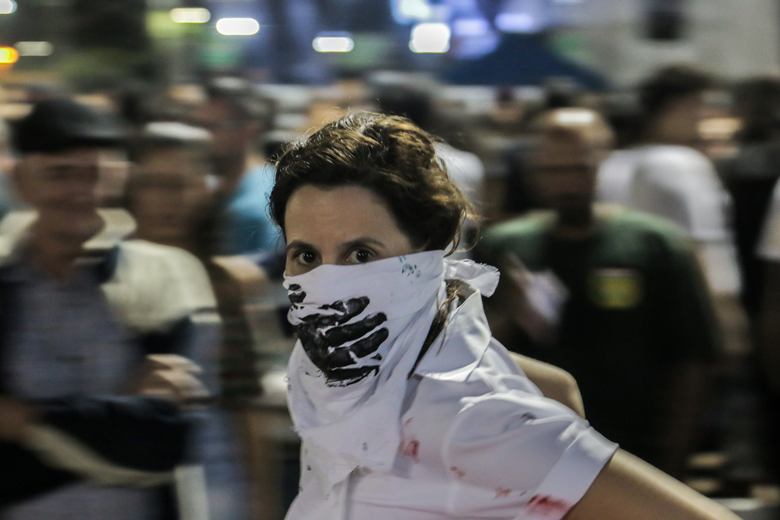 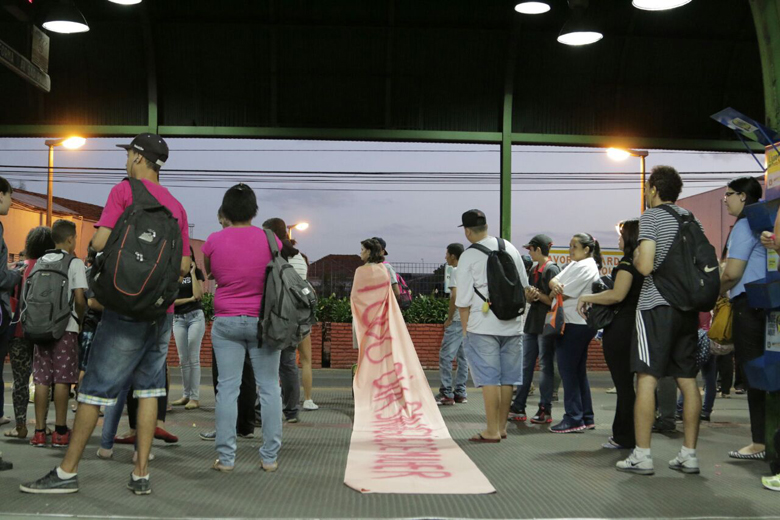 Why does Ella self-style as “well-behaved” while displaying such resistance, questioning, and intervention? Palomino herself explains: “É um texto de Simone de Beauvoir, Memórias de uma moça bem comportada. Então decidi ‘meu projeto vai se chamar isso—A Comportada. Só que aí eu fiz um perfil no Facebook e eles pedirm o primeiro nome e não dava pra ser A Comportada. Aí eu fui testando … ah esse nome não aceita, esse nome não aceita… então eu coloquei Ella. O Facebook que fez na verdade o nome. Aí o perfil bombou, bombou, tipo, em uma semana eu tinha 3000 amigos do Brasil e do mundo inteiro e as pessoas ficavam perguntando quem era a Ella, que era um mistério …” ["It is a text by Simone de Beauvoir, Memoirs of a Dutiful Daughter. So I decided my project would be called that—"The Well-Behaved.” Only then I made a profile on Facebook and they asked for a first name. It could not be “The Well-Behaved.” I then started trying out ... this name was not acceptable, that other was not acceptable ... so I wrote Ella. Facebook actually made the name. The profile blew up, blew up, like, in a week I had 3000 followers both from Brazil and the whole world and people kept asking who Ella was, which was a mystery ...”]. Ella’s quickly-won popularity on Facebook and Instagram only demonstrates the power that debates on the universal differentials that rule relations between the sexes can wield in the present day. These debates include the revival of feminist confidence, performative gender, conflict, politics, and conviviality, the non-recognition of women as influential actors in (virtual) culture and writing, and the gendering of social media. Ella represents, after all, a lingering desire to make room for women (in Brazil and elsewhere) to garner recognition of their active roles in understanding and disrupting representations of gender identity, conflict, and difference—an impulse which is still very much needed in the global present.

Ella, a Comportada [The Well-Behaved Ella] is:

You can find more about the Ellas: