This is an invitation to shift your gaze. 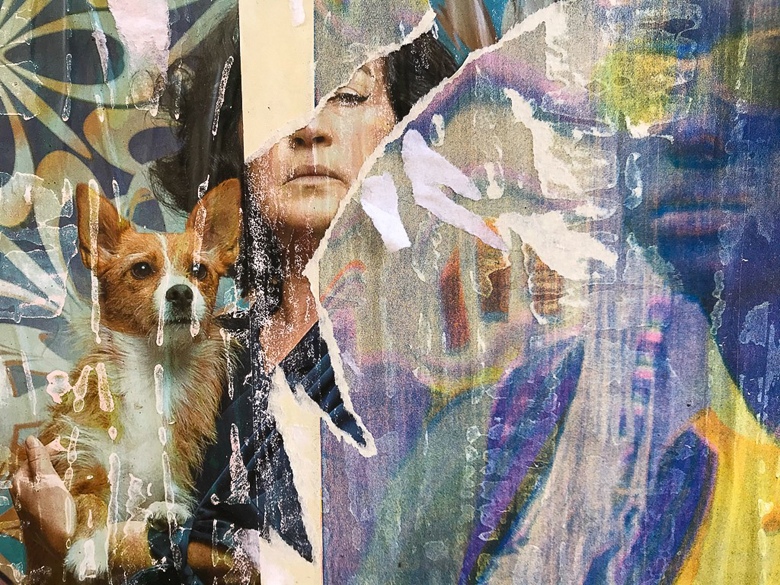 The object of interest of this essay is located in a space that is barely visible to the inattentive eye. I am speaking about the city’s surfaces and their wrinkles, inscriptions, and torn posters, which since our first encounter, have fascinated me. During the process of observing and photographically documenting uncountable surfaces in multiple cities, the city’s surface did not present itself as static, but as a vivid organ, which I refer to as the urban skin. The presented photographs have been taken within the project Metropolis’ Skin, in which photography is used as a tool for the investigation of the city’s surfaces. 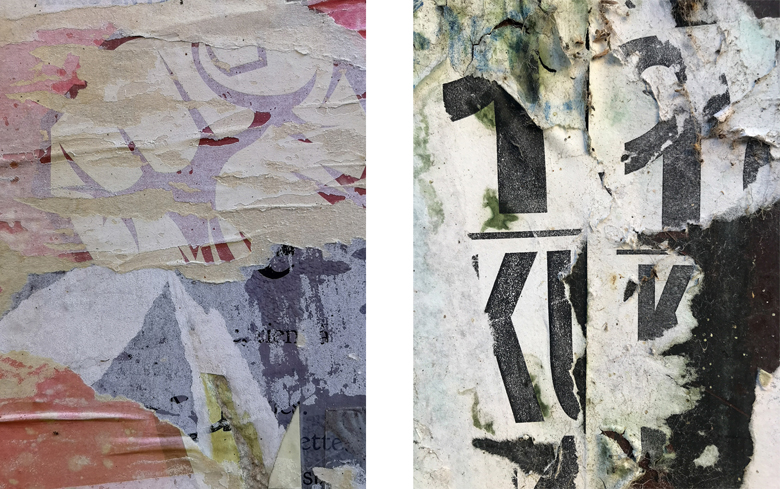 When we think or speak about cities, we often do this by using a wide variety of metaphors. Five metaphors that recur in many variations are the city as a community, as a marketplace, as a battleground, as a machine, and, lastly, as an organism (Solesbury, 2018). Such “extended metaphors” serve to explore the city as a complex and multifaceted system with many dimensions and layers of meaning (Solesbury). According to conceptual metaphor theory, as articulated by Lakoff and Johnson (1980), metaphors are not a mere matter of language, but a strategy of thought that makes it possible to experientially access realities which cannot be directly perceived. Many cognitive linguists nowadays agree with this approach and recognise that metaphors convey ways of seeing and understanding reality. According to Lakoff and Johnson, “the essence of metaphor is understanding and experiencing one kind of thing in terms of another”, so that their separate meanings interact to create a new understanding. In some cases, metaphors may even help to analyse problems and find solutions, when the analogue used for the metaphor carries an implicit problem and a way to address it (Solesbury, 2018).

When comparing the city to a living organism, we might primarily compare it to the human body, being the organism that we inhabit. Although some attributes differ from city to city, the organism metaphor contains characteristics that all cities share. Cities are not static, but entities in flux, that constantly adapt, grow, or decrease. Their structure is multi-cellular and composed of many interdependent parts, which means that a change in one part of the system will impact the other parts. The city follows a life cycle which begins with its birth, and is followed by growth or decline. Within the city, there is movement and noises; the city might be vibrating and pulsating. In order to survive, it consumes nutrients and resources, which are needed for its energy, growth, and repair. If the needs of the organism are neglected, it might get infected by a virus or suffer from illness. The city is built on a skeleton of concrete and wood; bones that hold it together and prevent it from collapsing, although they might break if they are old and weak if shaken by nature, or attacked by human hand. A river or long street may serve as a spine that gives it strength, and its outlying parts may be seen as fingers, reaching out into the surrounding countryside (Solesbury, 2018). Its centre may be its heart and its green areas may serve as lungs for breathing fresh air. Lastly, all imaginable surfaces of the city, form its biggest organ — the urban skin. 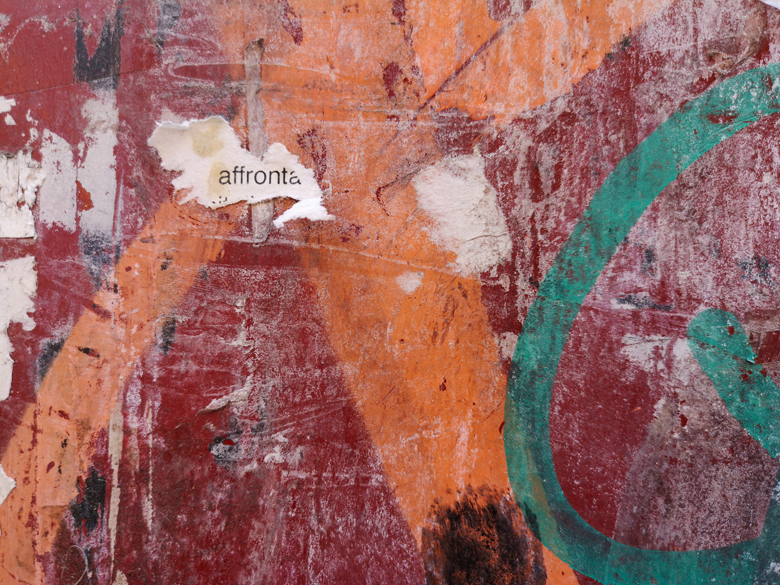 The city’s surfaces, or urban skin, frequently belong to walls that enable the demarcation and separation of a within and beyond, and, by that, they may even determine the possibilities and impossibilities of encounter (Brighenti, 2010). Although such walls or demarcating elements may be private, in the sense that they belong to a home or an institution, the surface is publicly visible and becomes a democratic and informal space of encounter; a zone of freedom, within the authoritarian demarcation of space. It is a space of expression, where inscriptions and traces are left. Due to the multiplicity of people leaving different forms of marks on the city’s surfaces, the urban skin can be described as a social diary, which is publicly displayed and constantly changing its appearance.

The urban skin may bear abrasions, scars, engravings, and wounds, which are witness to the city’s history, encounters, and stories. Such traces and marks are part of what Lefebvre calls the “writing of the city”, which refers to "what is inscribed and prescribed on its walls, in the layout of places and their linkages, in brief, the use of time in the city by its inhabitants” (Lefebvre, 1996). The layers of the urban skin narrate different stories, which overlap, overlay, or interweave, and which may appear as fast as they disappear, just as the city’s skin constantly decomposes and recomposes itself. In the process of unraveling the layers of the urban skin, we may encounter different forms of inscriptions, images, words, colours, patterns, textures, and marks that have been left by multiple hands and shaped by aspects such as conflict, abandonment, and time. 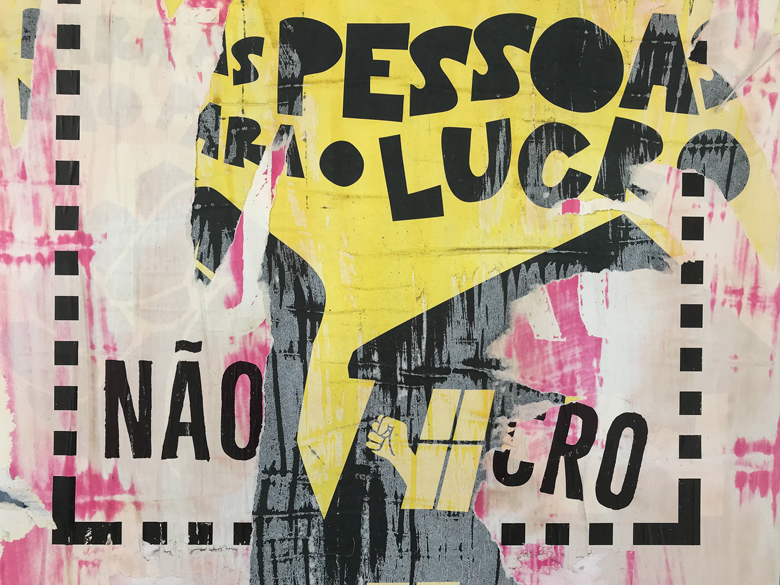 The project Metropolis’ Skin is interested in a part of the city’s surface, which can only be encountered by those who observe the urban skin with a careful gaze, and therefore, often remains invisible for the inattentive eye or those who traverse the city in a hurry. The works in question may be referred to with the term urban décollage, which describes décollage without artistic intention that occurs in the urban context, or more commonly known as “torn posters”.  The urban décollage appears with multiple colours, which may be bleached by the sun or washed out by the rain. Different textures may be observed, such as crackling layers of paper, bulging cardboard, residues of glue or shreds of a poster. There may be figurative elements, letters, words, and text, and in some cases the urban décollage might remind of an abstract painting. Although it might be difficult to reconstruct what the layers of the single posters originally displayed, the different layers merge in unique (de-)compositions which activate our imagination when trying to decipher or make sense of them.

In some cases, the viewer may perceive tension or conflict in the works, which can be evoked by paper that is ripped off in a certain way or by an image that overlays and cancels what has been there before. Also, we may encounter symbols or inscriptions that remind of conflict, which goes along with the common notion of surfaces being "spaces of friction, tension, and expression” (Andron, 2019). Moreover, the layers of the urban skin show that urban space is necessarily related with human activity and cannot exist on its own. When the different poster layers come together, they transform into interdependent parts that interact and dialogue with each other; creating a new meaning as a whole. What the works represent therefore goes beyond the mere acknowledgment of our entanglement in conflict since they represent our interdependencies with other (non-)human beings and our environment. They can be read as visual metaphors for our interdependencies and the coexistence of conflict and conviviality in the urban context, in the sense of living-together-with-differences. Hence, more than merely being a site of conflict, the urban skin is a space where conflict and conviviality coexist. 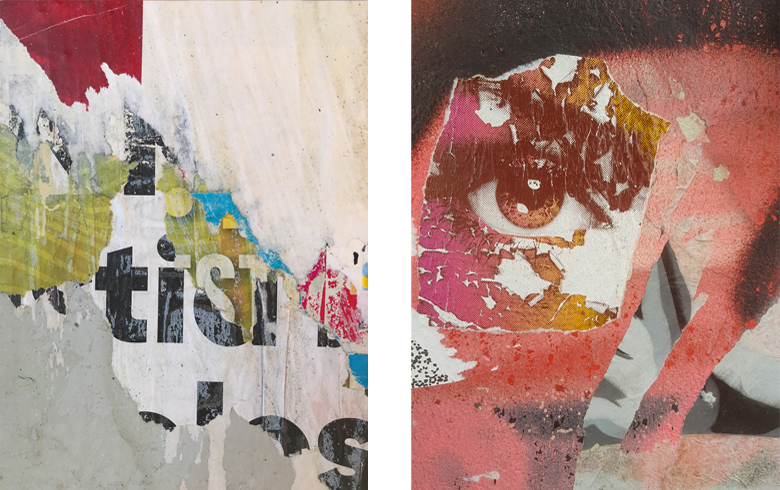 The photographic investigation and documentation of the city’s surfaces, or “curating” the urban skin, is both an act of care and curiosity. It is a practice that does not only require care and curiosity, but promotes it, firstly, through embracing our interdependencies, and, secondly, through shifting our gaze.

Thinking about the Latin origin of the word “curating”, as in - curare - or - cura -, leads to ideas of caring and treating. As suggested in The Care Manifesto: The Politics of Interdependence, care should take a central role in life, which implies to recognise and embrace our interdependencies (The Care Collective, 2020). In order to build a caring world, it is necessary to act upon the understanding that “as living creatures we exist alongside and in connection with all other human and non-human beings, and also remain dependent upon the systems and networks, animate and inanimate that sustain life across the planet” (The Care Collective). Moreover, along with the awareness of our shared vulnerability and interdependence, it is important to recognise our shared entanglement in conflict (The Care Collective, 2020). By photographically documenting the encountered urban décollages, they are considered as something worth documenting and preserving for posteriority. It is a practice of caring for the urban skin, which involves acknowledging and embracing our interdependencies.

Another idea that can be derived from the Latin - cura -, is related to curiosity or curious, which originally meant “careful”, “diligent”. As suggested by Haraway (2008), curiosity is an obligation which is tied to care and the mission of acquiring knowledge: “Caring means becoming subject to the unsettling obligation of curiosity, which requires knowing more at the end of the day than at the beginning”. To be curious means to care, to feel concern for and to engage with the surroundings, and thereby, contribute to oneself and the world with the knowledge acquired on the way. If the curiosity to engage with the surroundings is sparked, the eyes become more attentive. The careful observation of the city’s layers may then open up the imagination to the multiplicity of narratives that is inscribed in the urban skin. This is an invitation to shift your gaze.