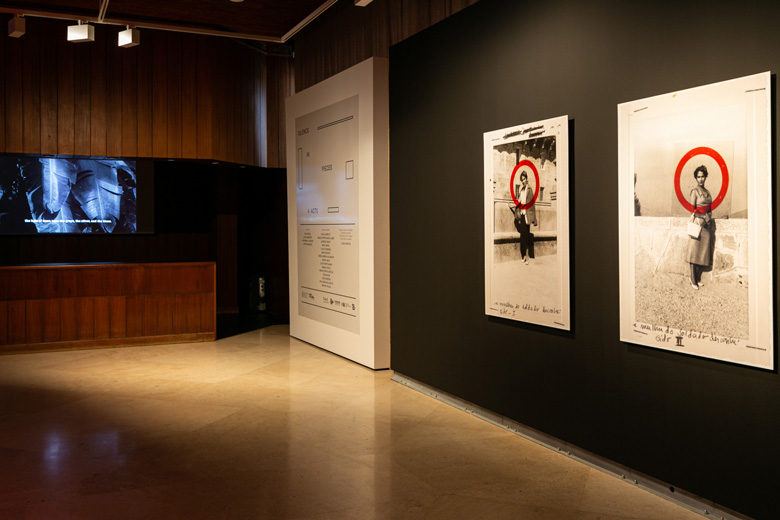 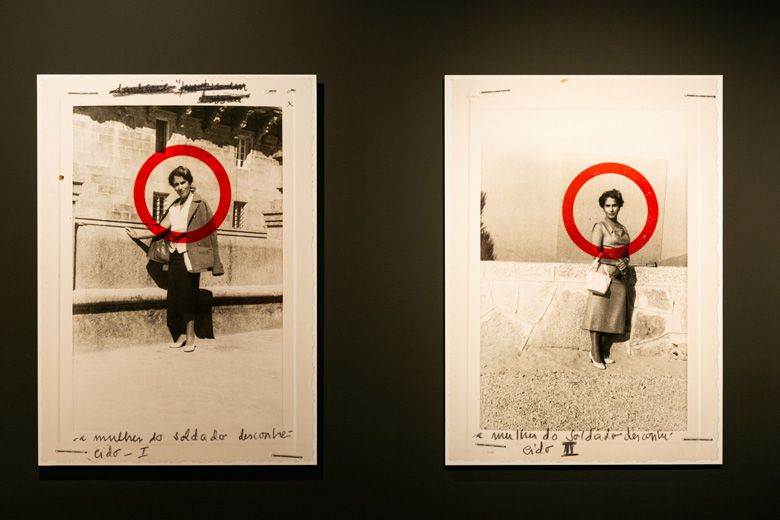 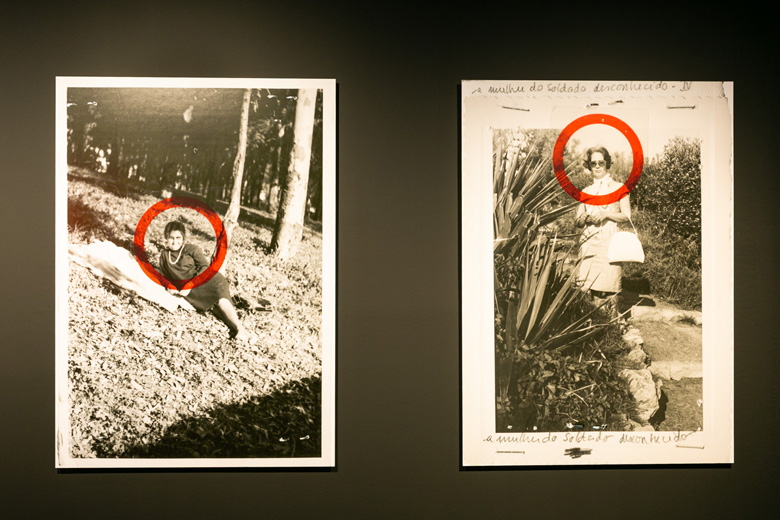 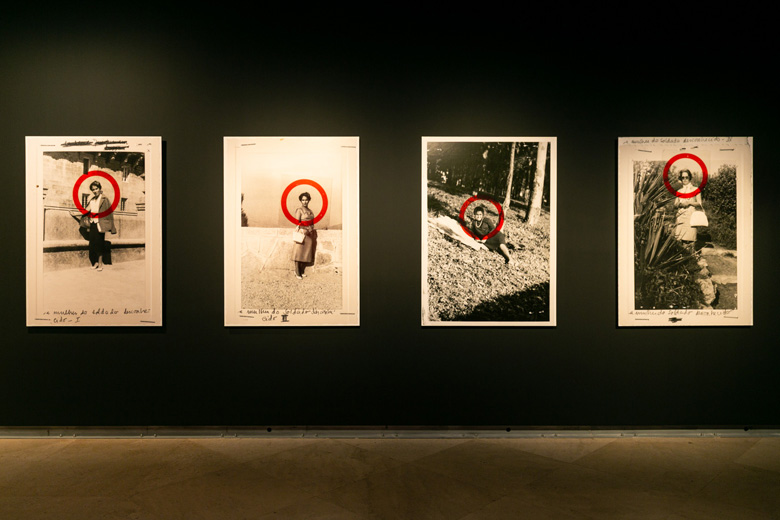 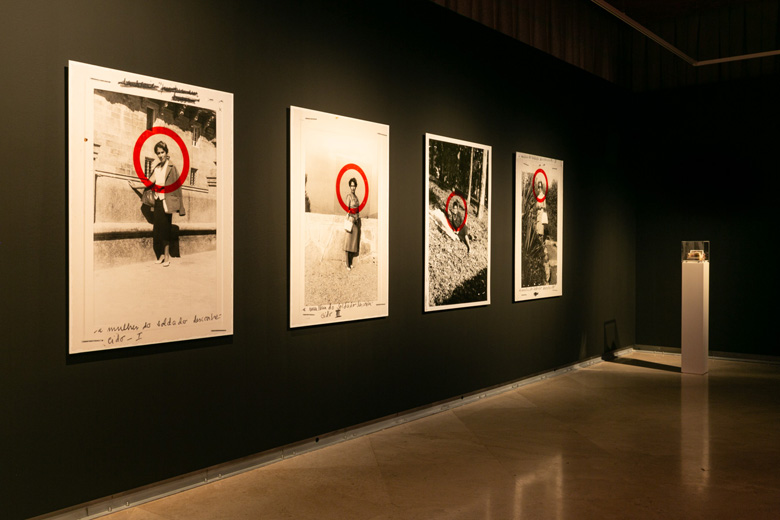 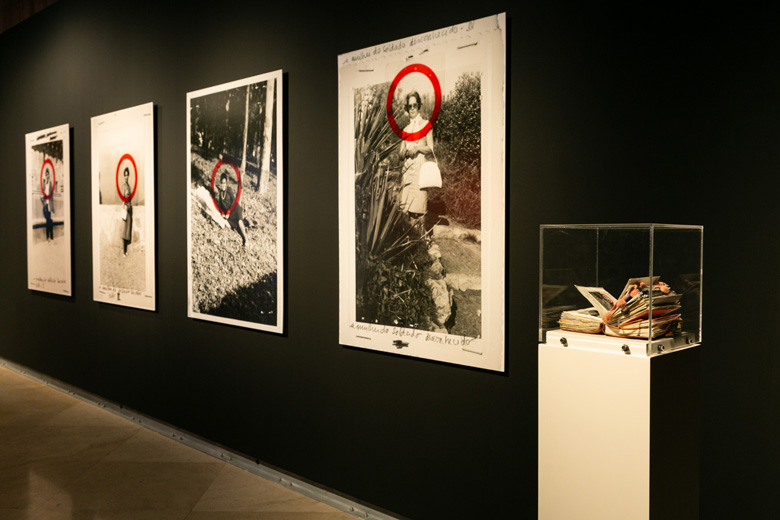 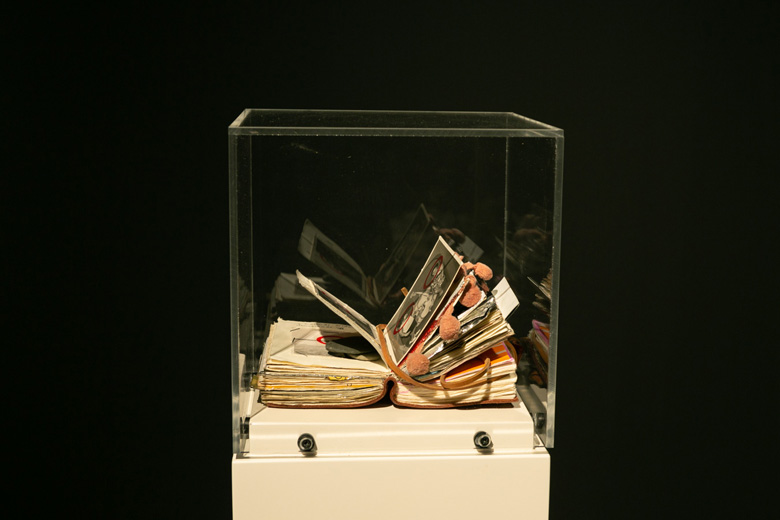 The wife of the unknown soldier

She must be a variety.

Change so that nothing will change.

For the exhibition Silence in Pieces: 4 acts, Ana Vidigal presents A mulher do soldado desconhecido (2020). The work consists of four large-scale printings of photographs depicting anonymous women, with their heads surrounded by deep-red circles, which were added by the artist. The images are all black and white and carry traces left by the time that passed since they were taken. With neat clothes, frozen postures, they stood there in front of the camera, gazing directly at the lens. Vidigal’s work invites the observers to dedicate a moment to wonder about the stories behind the old photos. Who did their eyes hope to meet?

The series were specially conceived for the exhibition and draw parallels with Ana’s previous works. She has explored the women’s condition in works such as Tornei-me Feminista para Não Ser Masoquista (2009) and has offered critical viewpoints towards the Portuguese colonial past in the installation Penélope (2000)2. These works naturally reverberate in the current exhibition. The personal perspective from which she deals with political issues crosses her production over the years.

Vidigal chose to locate the anonymous woman at the very center of her work. The red circle calls for attention. It urges the visitor to look, observe, and focus on their faces. Red is also the colour of blood, of violence, and of war. Indeed, these portraits were taken at the time of the Portuguese Colonial War, during the 1960s and the 1970s. The photographs were found by the artist in the Lisbon’s flea market, Feira da Ladra, in the neighbourhood of Alfama, close to where the artist lives and works. No one knows exactly who these women are, but they might have been “Madrinhas de Guerra” (Godmothers of War) who took these photos in order to send them to the soldiers that fought overseas. Vidigal’s choice to enlarge these images transforms them from being little women from a family album, into large-scale representations to be hung in a gallery space, highlighting what remained invisible in the found material. For Vidigal, this is a form to pay tribute to the often-forgotten role that women played during the war: “There exist a lot of monuments dedicated to the unknown soldier, but no one remembers the lonely war fought in the rear guard by the women who stayed alone with all their responsibilities, fighting an invisible battle against the established power” (Vidigal, 20203).

The Colonial War remains up and until today a chapter in Portuguese history that is yet to be adequately handled and told. Within the existing discussion, the women’s perspective is often overlooked in depictions of war, which is generally associated with strong, aggressive masculinity. A mulher do soldado desconhecido raises questions about women and war; women as mothers, wives, lovers, the ones who waited for their men to return, the ones who were left behind. Their steeliness, their silence, their passive posture stands as a contrast to the typical war visuals. No battlefield, no violence, no killing, no wounding. Yet, the war is present through its absence.

The role of the Godmothers of War was to support the soldiers placed overseas with letters, packages of goods, cigarettes, and photographs that were sent from the motherland Portugal. Moreover, they had an essential role in the war effort, raising national morale and ensuring the population’s faith in the war; they, too, in a sense, had been recruited. These images might look familiar to us, the portrait of a woman as a cultural artefact that exists beyond space and time, faded in black and white through wars and ever-changing political climates. Much like in Szymborska’s poem, the illusion of never changing steadiness becomes possible through the ability of those women to adapt themselves to the needs and demands of their environment — “change so that nothing will change” (2000).

The political context of the Portuguese Estado Novo adds another layer to the setting in which these photographs were taken. Irene F. Pimentel, Portuguese history researcher4, reminds that the autoritarian regime led by António de Oliveira Salazar allocated women a particular place within its realms. The regime praised three central values among all others: Deus, Pátria e Família (God, Motherland, and Family). The legal status of Portuguese men as the “cabeça de casal” (head of the household) left women to live under the full control and mercy of their husbands. The regime left the Portuguese women within the domestic realm, to observe the world from the inside, without interfering in it (2019).

Vidigal herself lived through the war as a child. Today, she chose to take the small photos of the anonymous women that she found at the market, and enlarge them into big scale printings, bringing them to the heart of the public, on a wall in a gallery. With Vidigal’s artistic appropriation, the little anonymous women became large, claiming their space. Vidigal, therefore, shifts these women from the realms of the private to the realms of the public, from the personal self to the political collective.

The stories of these women were lying hidden in the flea market just as they have been in silence and in shadow across History. Vidigal asks us to look deeply, to listen carefully, and to collect the pieces of these silences. We are invited to make our own stories out of the micro narratives that have remained untold or unheard. The title itself call us to be critical towards this History that raises monuments to unknown soldiers, but forget the women supporting them. In other words, we are asked to question the grand narratives that make History and, ultimately, to build other (hi)stories.

Part I of Ana Vidigal's reflections on her work A mulher do soldado desconhecido (The wife of the unknown soldier), part of the group exhibition Silence in pieces: 4 acts at the Galeria Fundação Amélia de Mello in her interview with Alfredo Brant.

Part II of Ana Vidigal's reflections on her work A mulher do soldado desconhecido (The wife of the unknown soldier), part of the group exhibition Silence in pieces: 4 acts at the Galeria Fundação Amélia de Mello in her interview with Alfredo Brant.