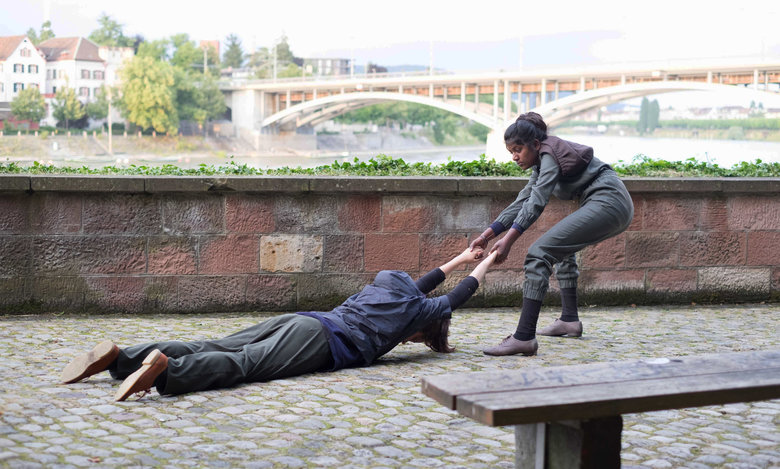 Eglė Budvytytė, Some were carried, some - dragged behind, Liste, art Basel, 2015

In September and October 2019 five artists will spend two months at a residency at Nida Art Colony. The residency is both research and production oriented, with the aim of creating newly commissioned art works for Nida Art Colony’s summer exhibition in 2020. The framework for the residency departs from a particular image from the Neringa History Museum in Nida, an image of a Prussian Post carriage from 18th century. During this time Nida lay on an important postal route connecting not only the East Prussian city of Memel (today Klaipeda) to Berlin and the rest of Prussia, but in a bigger picture also providing postal and personal transport services between Paris and Saint Petersburg, a route which among others the philosopher and art critic Denis Diderot, a prominent figure of the Enlightenment, undertook in years 1773–1774. Compared to the land route, the Curonian Spit provided a shortcut, yet for the carriages to be able to pass through the sandy strip of land, they drove with two wheels in the water where the sand is harder, eliminating thus the risk of getting stuck. This image is hence both a document of Nida as a place of passage, connected to imperial centres of power and knowledge, of human resourcefulness on how to carry on in adverse conditions, and – on a metaphorical level – an example of border epistemology in terms of belonging to two (or more) contexts at the same time. Situating the residency within the larger framework of 4Cs: From Conflict to Conviviality through Creativity and Culture, the role of mediation as a means of conflict resolution comes to the forefront. In this sense, the figure of the mediator is a neutral third party who instead of belonging to multiple contexts belongs to none. The fluidity of Nida as a place where not just carriages but also sand dunes – and whole villages – move over time and where the rhythm of the high and low tide changes the outline of the coastline, is however also grounded in the political history of Europe: 2020 will mark one hundred years since the border dividing the Curonian Split in half became a state border, first between Germany and Lithuania, and since WWII until today between the Russian exclave of Kaliningrad Oblast and Lithuania – and nowadays also the European Union. Thinking about borders, some of which run directly through bodies, is also an invitation to think together about possible portals to the transcendental, transgressive, and traumatic, reconnecting with legacies we were cut off from, and thinking about practises of healing and restitution in which mediation can play a crucial role.

Biographies of the participants:

Paul Maheke (b. 1985) lives and works in London, UK. He completed an MA Art Practice from École nationale supérieure d’arts de Cergy (2011) and was an Associate of Open School East’s Programme of study, London/ Margate, UK (2015). With a focus on dance and through a varied and often collaborative body of work comprising performance, installation, sound and video, Maheke considers the potential of the body as an archive in order to examine how memory and identity are formed and constituted. Selected solo exhibitions include OOLOI, Triangle France, Marseille (2019); A fire circle for a public hearing, Vleeshal, Middelburg (2019) and Chisenhale Gallery, London (2018); Letter to a Barn Owl, Kevin Space, Vienna (2018). Selected group exhibitions and performances include Meetings on Art, 58th Venice Biennale (2019); Baltic Triennial XIII: Give Up the Ghost, Tallinn Art Hall (2018); Ten Days Six Nights, Tate Modern, London (2017).

Eglė Budvytytė (b. 1981) is an artist based in Amsterdam, the Netherlands. She graduated from Piet Zwart Institute in Rotterdam in 2008, and since then has been working at the intersection between performing and visual arts. Budvytytė makes videos and performances to explore the relationships between body, public spaces and audience. She looks at the body as a site where different powers operate, and approaches movement/gesture as technology for a possible subversion of normativity, gender and social roles. Her work was shown, amongst others, at 13th Baltic Triennial, Riga (2018); Lofoten International Art Festival (2017); Block Universe, London (2017); Art Dubai commissions (2017); CAC, Vilnius (2016); Liste, Art Basel (2015); 19th Biennale of Sydney (2014); De Appel Arts Centre (2013); and Stedeljik Museum in Amsterdam (2013). She was resident at Le Pavillon, Palais de Tokyo, Paris (2012) and at Wiels Contemporary art centre, Brussels (2013).

Jin Mustafa (b. 1988) is a visual artist, DJ and electronic music producer based in Stockholm, Sweden. She works with various media, such as moving images, objects, sound and music. Her works explore the relationship between technology, imaginary spaces, and questions of personal and collective memory. As a music producer she made sound for Filipa César’s lecture perormace Meteorisations: Reading Amílcar Cabral’s Agro-Poetics of Liberation (2019) at Sonic Acts in Amsterdam and exhibition Looming Creole at Haus der Kulturen der Welt in Berlin (2019). Recent exhibitions include The Shift, Haninge Konsthall, Stockholm (2019), Ripple at Alta Art Space in collaboration with Signal, Malmö (2018); If she wanted I would have been there once, twice or again at Zeller Van Almsick Gallery, Vienna (2018); a collaborative work with Natália Rebelo for Chart Emerging at Kunsthal Charlottenborg, Copenhagen (2018); and I’m fine, on my way home now, Galleri Gerlesborg (2018) and Mossutställningar, Stockholm (2017).

Elin Már Øyen Vister (b. 1976) is an artist, composer, and forager based in Røst, Norway. With a broad background in audio and music, as a DJ and producer, and in field recording and radio, they bring an interdisciplinary approach and experience of a multitude of practices to their expression. Már is occupied with listening as artistic practice and as a way to compose, sense, and experience the world, much inspired by Pauline Oliveros’s ‘deep listening’ philosophy. Már’s work strives to break with Western patriarchal hegemonic narratives that have placed the human being in the centre and instead focuses on the landscape’s innate stories and knowledge, influenced by indigenous methodologies and indebted to and informed by queer, multicultural, and pluriversal understandings of life and the cosmos. Their ongoing long-term projects include Soundscape Røst and Deconstructing Norwegian-ness. They co-run Røst Artist in Residence at Skomvær Fyr in Røst.

Mark Ther (b. 1977) is a visual artist and filmmaker based in Prague, the Czech Republic. He graduated from the Academy of Fine Arts in Prague, including an exchange at the Copper Union for the Advancement of Science and Art in New York. Ther’s videos and films, which often combine reality with fiction, take as a subject traumatic, controversial, and suppressed issues in relation to identity, gender, sexuality, and the Sudetenland identity, related to the history and deportation of the Sudeten Germans from the Czech borderlands after WWII. These issues are complemented with elements of humour, pop culture, sensuality, camp and queer aesthetics. His films are characterised by an enigmatic atmosphere and the narrative of the untold, opening a field of interpretation to the viewer. In 2011 Ther was awarded the Jindřich Chalupecký Award for young Czech artists. His works have been shown internationally within film festivals and visual arts institutions.