When Luísa Santos suggested that I might write a brief reflection on the present moment of the coronavirus pandemic, particularly on what it might mean in the way we understand and live the notion of conviviality, I was immediately receptive. I found the invitation itself a gesture of conviviality, an opportunity to join a debate, started by Luísa and taken up already by Ana Margarida Abrantes and Michaela Crimmin, on the possibility of adding a fifth c to the familiar four: change.

Well, yes. I think that this is a time of change. But instead of trying to diagnose the nature of change in the present time and to prognose its future effects, I was stricken, from the beginning of the pandemic scare in Europe, by the similarity of the measures of containment enforced now, in the 21st century, and the measures taken throughout the 17th century to contain the plague when it appeared in English or in French towns. The nature of these measures was already clearly presented in an English text by Daniel Defoe, called A Journal of the Plague Year (1665). But Michel Foucault, in the chapter called “Panopticism” in the book Discipline and Punish, made us, students of “culture”, not only aware of the existence of very detailed regulations, enforced throughout the seventeenth century and beyond to secure, as much as possible, urban populations from the risk of contagion, but also of the possible consequences of such measures. The only efficient means to contain the plague was confinement, or the quarantine. Then as now. And some sentences by Foucault chillingly recall contemporary experiences: “[The city] is a segmented, immobile, frozen space. Each individual is fixed in his place. And, if he moves, he does so at the risk of his life, contagion or punishment.” Or, this: “The registration of the pathological must be constantly centralized. The relation of each individual to his disease and to his death passes through the representatives of power, the registration they make of it, the decisions they take on it.” The Foucaultian interpretation of the impact of these measures concerns the idea of surveillance as the most efficient means of social control. The direct observations of Daniel Defoe refer also to strict means of control put in place in the city of London at the time of the plague, and to an entire hierarchy of people dedicated to examine, assess, treat, decide, on issues of life and death for the people and families struck by the disease: Watchmen, Searchers, Chirurgeons, Nurse-keepers. For Foucault, the 17th centuries measures put in place to contain the spread of the disease created a new model of disciplinary project, one which brings together confinement and strict organization and surveillance. This is the project metaphorically represented by Bentham’s Panoptical prison and by post-Orwellian nightmares of totalitarian societies.

There is that, of course. But there is also this anguishing verification that, when faced with an epidemic for which no cure is on sight, we need to resort to the ancient pre-scientific means of containment: confinement, quarantine. That is: separation, isolation. The huge difference, in my view, is that we can now take the dystopian means of surveillance, used for behavioural control, as tools for conviviality. The mediatic culture we live in, supported by individual creativity, will certainly be one of the decisive instruments that will bring us out of this crisis of uncertainty and fear. Conviviality will, most probably, change through renewed uses of these means: at a very basic level, the pandemic has made us all “excluded”. So, we need to reinvent ways of being in society. And I think we are already seeing signs of very creative ways of coming together without breaking the imposed separation. 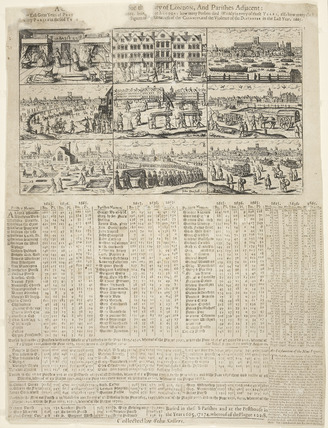 Plague broadsheet comprising nine scenes relating to the 1665 plague. The text summarises bills of mortality at that and previous plague visitations. The 1665 plague killed around 100,000 people. This broadsheet has nine illustrations of the: The sick at home; Shutting up the houses - once the plague had infected one member of a family, they were all locked into the house to prevent the disease spreading; Fleeing London by boat - 10,000 people camped on boats in the Thames to avoid infection; Fleeing London by land - wealthy citizens, including the King and his court, escaped to uninfected areas; Carrying the corpses; Carrying the dead in carts; Burying the dead - the ground level in London's cemeteries rose by several feet due to the number of dead buried in them; Funeral procession; Return to London - by October 1665 the number of deaths started to decrease and people gradually returned to London.