Ahlam Shibli (1970, Palestine) is a Palestinian photographer. Her work, indeed documentarist, it can be seen as reportage, yet not so dramatic. What captured my attention while observing her pictures was the simplicity and the somehow lightness of the moments she is able to capture, despite strong and out of the ordinary circumstances. I am presenting some reflections about her practice, which are actually an outcome of an interview I conducted with her, which was more a conversation, a two-head reflection around her work. This paper was originally (and in a deeper version) presented at the Conference “Cultural Literacy & Cosmopolitan Conviviality” in Lisbon, what follows here is a brief extract.

As many Palestinian artists, her glance focuses on what happened and is happening in her homeland, and on the idea of loss, of home, beside the Israeli-Palestinian conflict itself. As the series “Unrecognised” (1999-2000) where she is portraying a Palestinian village, which is not recognised by Israel and it is not appearing on the Israeli maps. Or “Death” (2011-2012) which is a study about the commemorative images of the “martyrs” (Palestinians who died because of their fight against the Israeli occupation of their homeland).

But while most of the essays and articles about her and her work are concerned and related to the topics of home and loss, I find in her series a sort of reflection of power dynamics and coexistence, particularly in her series “Trackers” (2005). The complete series, presented for the first time in 2006 at Kunsthalle Basel, is composed by 85 pictures, some are black and white and some coloured, portraying Palestinians of Bedouin descent, who made the choice to enrol in the Israeli Defence Force.

In 1948 happened what the Palestinians define as al-Nakba (the Arabic word for catastrophe): following the UN Resolution in 1947, which foresaw the division of what was the former British “Protectorate” of Palestine in two regions, more than 700.000 Palestinians were expelled from their homeland. Some Palestinians were allowed to remain in Israel, and they became the so-called “48 Palestinians”. By the Israeli state they are considered, and identified, Israeli-Arab (not Palestinians) and they are not obliged to attend the military service, which is mandatory for the rest of the Israeli Jewish citizens. They can join the army as volunteers, and they are encouraged to do so by the Israeli State. Ahlam Shibli, illustrated to me that if they serve, they receive a sort of “benefit” which consists in receiving a discount of 70% to buy a land where they could eventually build a house.

The Palestinian Bedouin volunteers are then put in a special unit, named the “Tracker Unit”, which acts in the Palestinian Occupied Territories or in the border area, taking care of patrolling the borders and tracking the transgressors: in a way serving against their own people, the Palestinians. 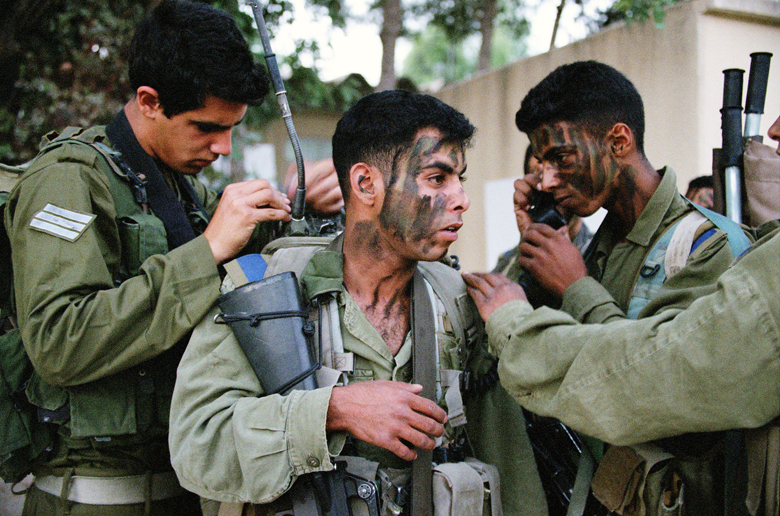 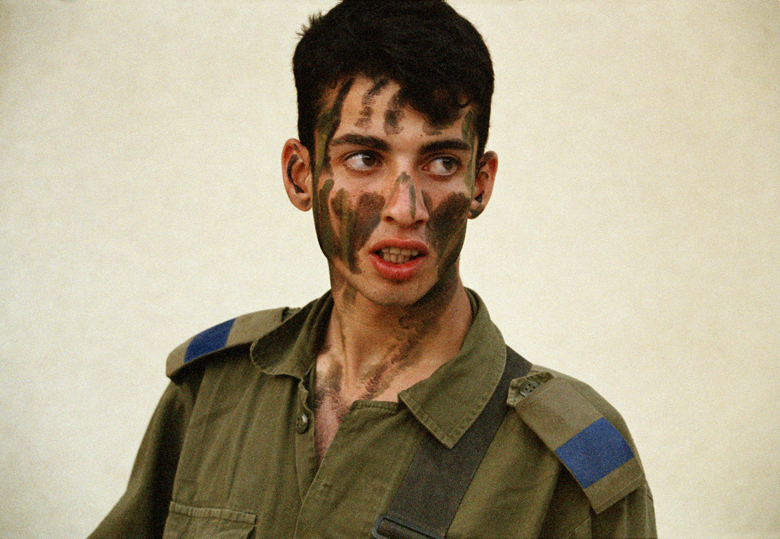 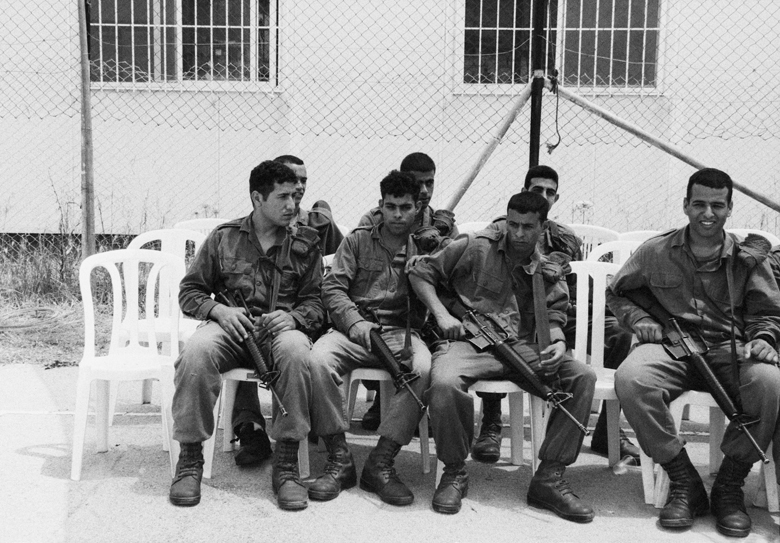 This situation extremely contradictory is mirrored in Shibli’s pictures, which are in a certain way contradictory themselves. In her images it can be noticed that instead of portraying experienced trackers, or combat situations, Shibli’s glance targeted young soldiers during their first days of military practice. The photographer exalts their fragility as perhaps a reflection on their immaturity, which led them to make this choice. She was not interested in portraying them as macho, but in a way, Shibli aimed to reverse the macho idea of a military, the one that they might have created in their mind, one maybe of the reasons leading them to volunteer. These young boys do not fill any sort of stereotype. Shibli avoided to picture dramatic moments: according to her, when portraying a dramatic moment, the viewer’s attention will inevitably focus on that specific (dramatic) moment and not on the portrayed subject, not on his/her daily life. Shibli wants to emphasize the fact that in this situation the dramatic moment is embed in the everyday life. 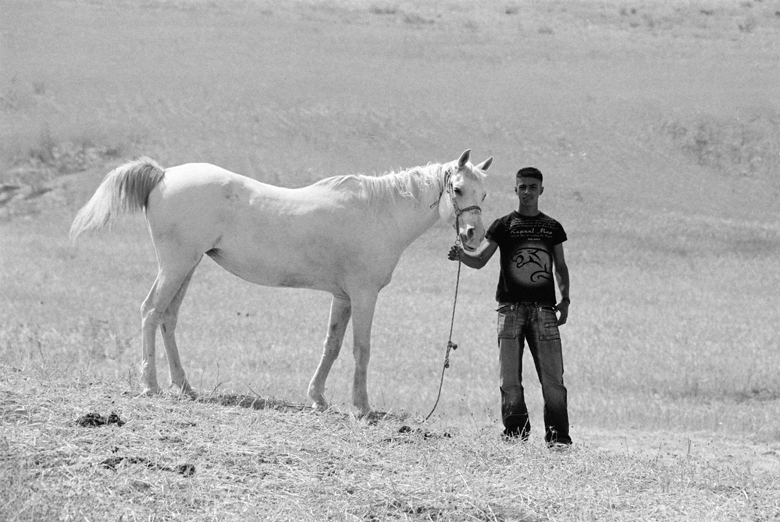 In the picture above, it is powerfully visible the contradiction that Shibli succeeded to document. Here the photographer pictured one of the young trackers, who came back home during a break from the military service. He is portrayed next to his horse, a symbol of the nomadic Bedouin tribe. The word “Bedouin” comes from the Arabic bedewin, which means “the inhabitant of the desert”. Bedouins are nomads, even if after the Nakba they lost their nomad nature and started to settle in small villages composed by groups of families. Thus, Shibli pictured somehow the very moment in which the young Bedouin/tracker returns not only home, but also re-enters, re-embodies into his true origins, roots and people, suggesting that this is the only place where they could behave as Bedouins, as their true-self. 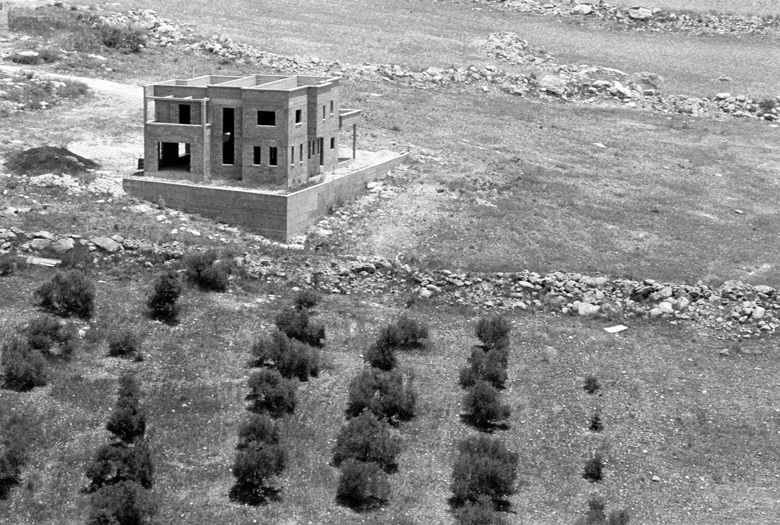 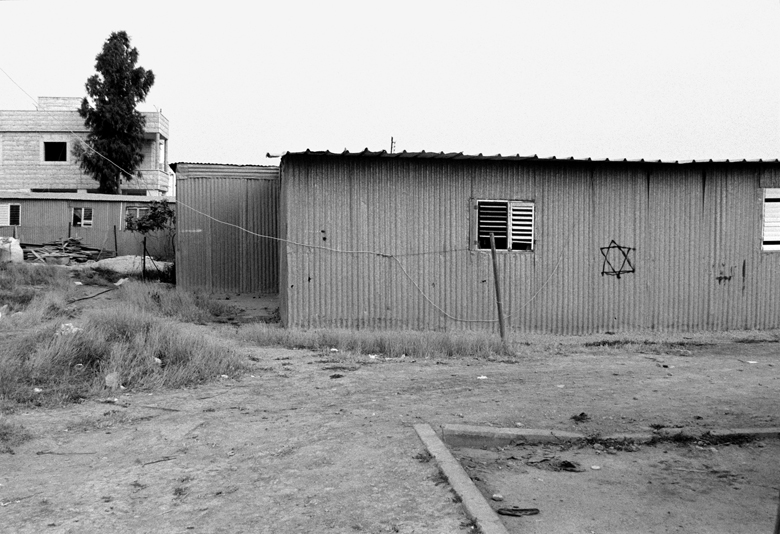 These two pictures are portraying the land, the houses of those who finished the military service and finally managed to get a land and build their own house. I find particularly interesting Shibli’s decision to photograph houses that are under construction, as to create a sort of metaphor of the trackers, whose identity and historical background is under (re)construction as well. On one of the pictures there is a star of David in a form of a graffiti. The beholder cannot understand who did it. An act of vandalism from the Israeli community nearby or was it made by the Bedouins themselves, as a statement, evidencing to which side they now belong?

These images are extremely contradictory as they attempt to reveal contradiction in coexistence, as contradictory is the situation of the trackers in itself. Adam Szymczyk points out that the trackers are in a situation of “direct” confrontation: with their people, with the Israeli people, but mostly with themselves. In their quest for belonging to something they are seen as “traitors” by the Palestinians but they are also will never be considered as 100% Israeli by Israel and its other citizens. When interviewing Shibli, she mentioned a conversation she had with a tracker, remembering him saying: “You know, I want to go to the army so that they will finally let me enter into clubs in Tel Aviv – as now I am “just” a Bedouin – and perhaps I can also have an Israeli girlfriend.”

Therefore Shibli in “Trackers” highlights the contradiction of a failed coexistence action, which perhaps actually never wanted to start nor to happen. A process in which the dominant power brought, as Frantz Fanon in The Wretched of the Earth (1961) claims “the violence to the home and the mind of the native”, dehumanizing somehow the subject and erasing its identity, making it enter into an identitarian limbo but also a limbo of acceptance, being accepted mainly by itself, and, finally, somehow trying to identify itself with the dominant power.

Quoting a sentence in Shibli’s statement of her series:

“The project is concerned with the price a colonized minority is forced to pay to the majority of colonizers, perhaps to be accepted, perhaps to change its identity, perhaps to survive, or perhaps all this and more.”

In this series, Shibli is able to portray strongly and effectively what is the outcome of the coexistence between different cultures and which kind of power relations are formed by it. But mostly, in picturing non-dramatic moments, Shibli emphasizes effectively the impact of different coexistences without giving any labels and revealing that coexistence is not made of drama moments but of everyday life ones.