Politics of Silence is a anthology-book-exhibition about silence, published by the Centro de Estudos de Comunicação e Cultura (CECC), Faculdade de Ciências Humanas da Universidade Católica Portuguesa, edited by Luísa Santos with the editorial assistance of Ana Fabíola Maurício, both as a concept and as a practice which is essential to contemporary visual culture in its relationship with the political.

The digital version of the book is available here. 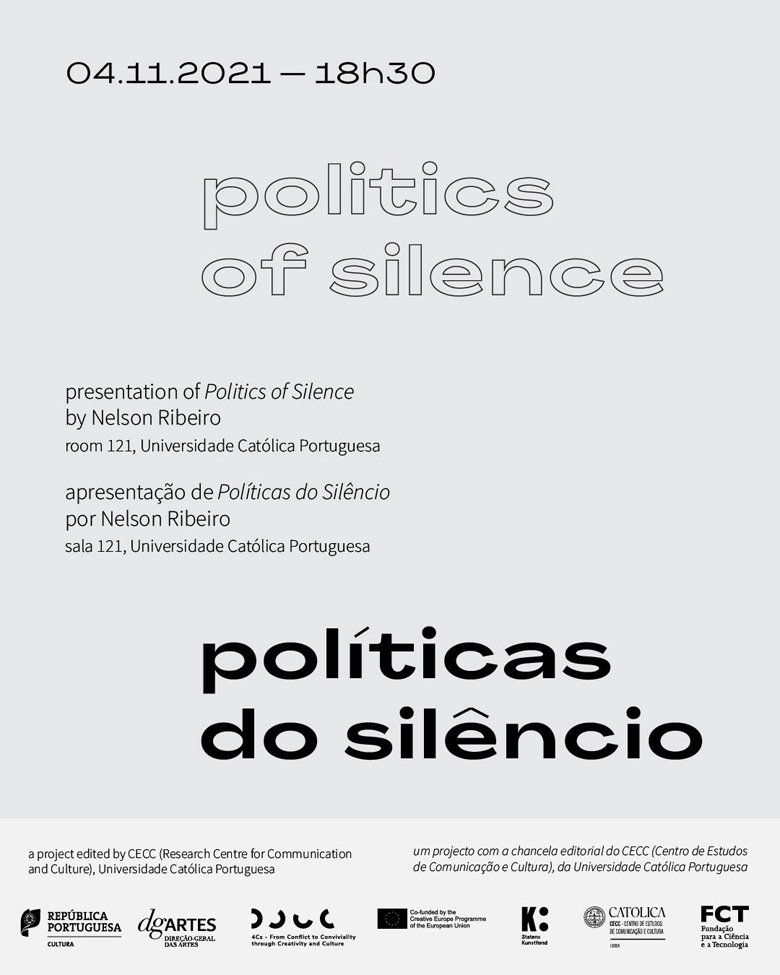 If we think of the dictionary’s definition of silence (a period without any sound; complete quiet; a state of not speaking or writing or making a noise: a state of not communicating), we might think of passivity. Nevertheless, silence has been used violently across various political regimes to censor and erase dissonant ideas, identities and narratives. On the other hand, as artistic practices have shown, silence can also operate as a poetic protest, a currency, and a powerful tool of resistance.

Politics of Silence aims at developing knowledge, in particular on the power relations associated with narratives that determine what we recognize as being the history of humanity. It is also intended to contribute to the public discussion about the construction and erasure of the narratives that constitute the contemporary world we live in via artistic production as well as the theoretical frameworks that inform those.

At practical and formal levels, this anthology-book-exhibition, with an online and a printed version, is divided into 2 parts followed by an introduction that frames it in the contemporary moment. The first part, of applied research, consists of visual essays produced for the exhibition-book formats (print and online) making use of the corresponding media (paper and screen). Pages and screen operate as walls for the exhibition of the visual essays. The second part, theoretical and essayistic, are dedicated to reflections of various authors.

The editorial methodology of this anthology-book-exhibition is rooted in applied research via artistic practices and the critical analysis of those practices within transdisciplinary and transcultural approaches. Such method aims at, rather than reaching a consensus, contribute for knowledge production. More specifically, the project is grounded in the production of theory as well as practice on visual culture within the dimensions of mediation, systemic conflict, and identity through the lenses of works that represent the diversity of voices and perspectives that define art and life in our contemporary times.

Furthemore, a workshop, departing from the visual essays of the book, will be organised at the HANGAR, in Lisbon, for children aged between six and twelve years-old in December 2021.