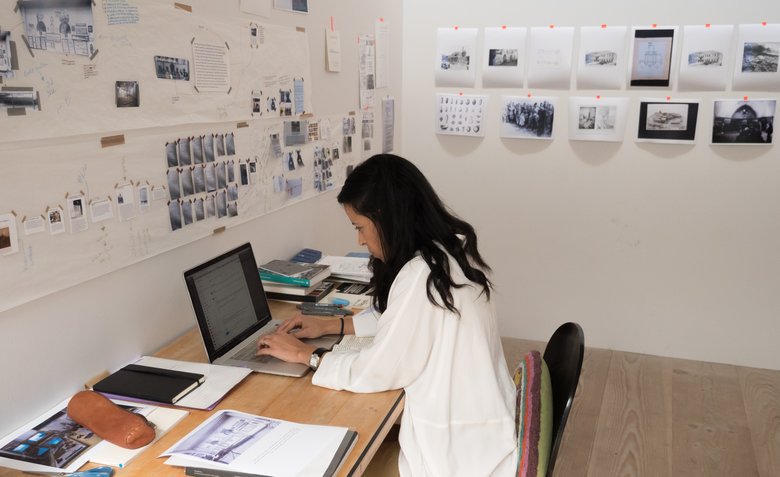 Noor Abuarafeh’s recent residency in London, where she was based at the Delfina Foundation, investigates the unseen rather than the seen. What sits outside the frame of a photograph or outside the material confines of an archive? And how do we remember what is missing? Directed towards the notion of ‘residing’, and in alignment with the convivial ethos of 4Cs, the Delfina Foundation acts as both a host and a hub for artists to connect and expand their network, creatively mediating between the local and the global. Delfina’s intimate space opens up to the wider public through exhibitions and regular ‘family suppers’ where people from within and outside the art sector are invited to meet the artists, to support them, and to exchange ideas.

Noor's artistic approach corresponds with the residency's collaborative framework. Her practice relies on interaction with others, where collective working and knowledge sharing are implemented both as tools to dismantle historical accounts and to reconstruct them. Her time here has both been informed by her past work and sparked new investigations, allowing different strands of research to co-exist and materialise in different ways. The residency has revealed two stories that run in parallel, one from before Noor came to London, and one that emerged during her time here. Relying on her careful approach to the archive, both separate narratives are concerned with disappearance, memory, and concealment.

With an interest in history – how it is shaped, visualised and understood – Noor started by investigating photographs. Approaching the photograph with a critical eye, she would constantly question what it can hide and what lies are being told to its viewer. Before coming to London, Noor had come across a photograph of fourteen male Palestinian artists. She sought out archives to trace their stories, and after realising that archival materials are difficult to find in Palestine, she began meeting people and collecting different oral histories and personal accounts. Later, after producing her video work ‘Observational Desire On A Memory that Remains’ (2014), she learned that four female artists were part of that exhibition but were missing from the photograph. Through their exclusion from the visual document, they had been written out of the exhibition's history, and one is left to wonder how we remember the omitted.

Noor observed that disappearance does not only affect humans but also objects and artworks. After reading an article about seventeen missing exhibitions from 1979 to 2009, she wanted to research the cause of their disappearance and uncover the exhibited Palestinian paintings. Starting with 'Palestine, Key to Culture & Peace', a 2005 exhibition in Martigny, Switzerland, Noor traced these paintings and their journey from the gallery to different storages in London1. 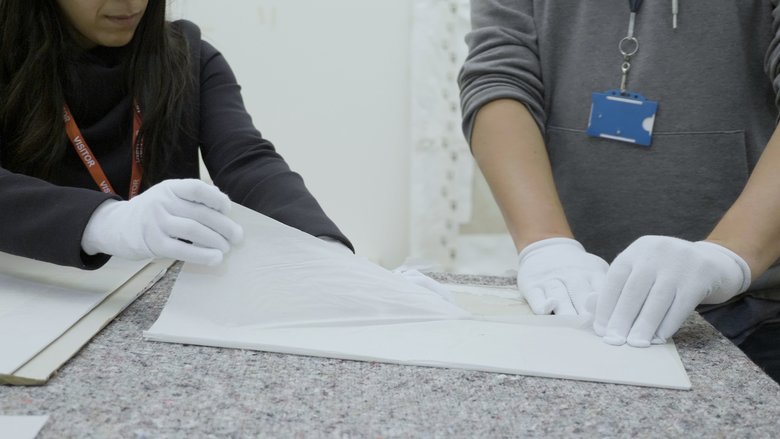 Noor's residency in London presented an opportunity for material discovery, locating many of these lost paintings in the collectors' private spaces and freely accessible archives and museums. However, this discovery is neither an end point nor a place of truth; her approach to visualising and understanding the past relies on merging fact with fiction. Without hierarchically favouring one, she combines the visual document − such as a photograph − with the personal accounts that she collects − sometimes rumours or hallucinations − to form a new narrative.

Noor employed this methodology in her research at the Imperial War Museum, which centred on a photograph from 1919 of an exhibition presenting Jerusalem. She contextualised it within the broader history of Palestine, namely when the Ottoman Empire transformed into the British Mandate, and when the 'Pro Jerusalem Society' had launched a civic agenda to establish the first museum in Jerusalem. She also researched the years preceding the photograph, specifically 1915, when many Armenians were escaping the Ottoman Empire as new refugees. Their labour, and in particular their famous clay and ceramics production, were instrumental in making the image of Jerusalem constructed by the British Mandate, but their contribution is essentially missing from the photograph. 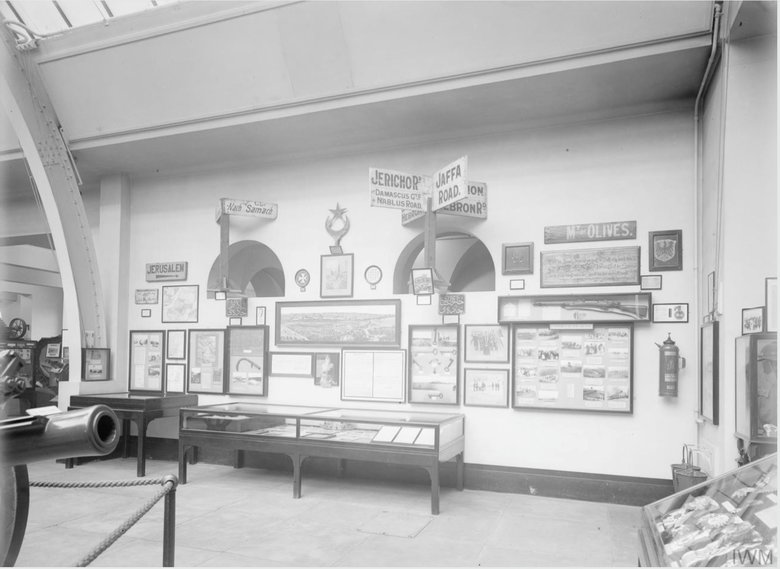 Photograph of the Palestine and Arabian gallery at the Imperial War Museum, catalogue number: Q 62949

The photograph is a visual signifier, a civic timestamp showing how Jerusalem wished to present itself. For Noor, it serves as a reminder that the archive can simultaneously reveal and hide histories. Similar to the disappearance of the female artists in the exhibition photograph she had found earlier, there may be other objects that relate to the exhibition from 1919 but are missing from this visual account. For example, how does the labour of the Armenian refugees manifest in the photograph and how else can you reveal this hidden history?

Through Noor's cycle of observing a photograph and subsequently questioning what she sees, her practice touches on a greater contemporary issue: when the archive does not ensure historical clarity and thus cannot illustrate the past, we must rethink its purpose and negotiate how we can, at once, productively use and challenge it. Noor's research before and during the residency reminds us of the potential that a single photograph can hold within it. When one questions disappearance and extends this concern to artworks as well as people, alternative narratives and new ways of seeing are formed. Like the Palestinian female artists who disappeared from their exhibition's visual history, or the paintings that never returned to Palestine, ideas of displacement and searching for a home − issues which are central to global politics today − are opened up and reimagined.

One of the outcomes of the residency is a publication, supported by 4Cs and Al-Mamal Foundation in Jerusalem, which investigates the visual contents of the photograph from 1919 and explores the history of Jerusalem's first museum during the British Mandate. Just as the publication connects the Armenian history of 1915 to the photograph from 1919, binding it into one single document, Noor's ongoing work exploring oral histories, rumors, and personal stories will be integral to this history and our understanding of it.

London is a middle ground for Noor, a reference point for past research and a springboard for new findings. Her residency sits within a long-term research project that continues to accumulate with each archive she visits, each painting she observes and each individual she listens to, and her investigative approach to archival material ensures that what is written out of history is valued just as much as what is written in.