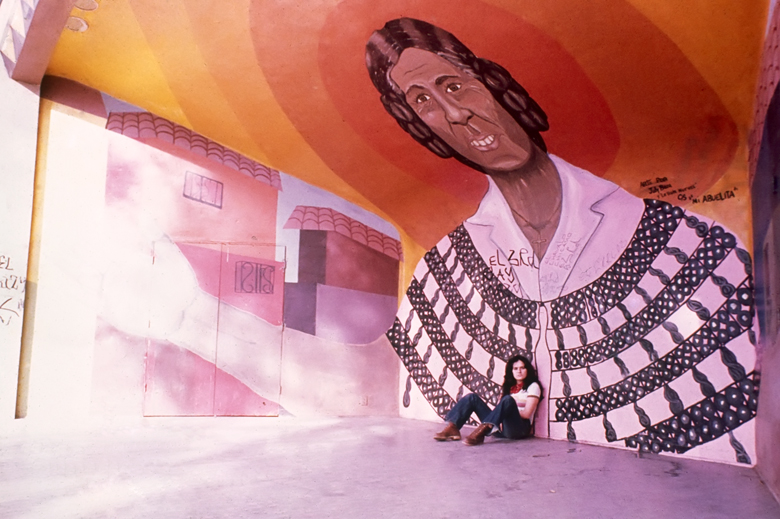 In 1848 the U.S and Mexico signed the Treaty of Guadalupe Hidalgo which ended the American-Mexican War. The document enforced the annexation of many former northern Mexican territories from the U.S, among them the region of California. Roughly 80.000 Mexicans lived in these new American territories, among them Judy Baca’s grandparents. The treaty gave them the option of migrating to Mexico, or to stay in the U.S with an American citizenship and full civil rights (Rives, 1913).

From the time of California’s annexation, Mexican-American history, identity, and culture have been constantly neglected in education. Monuments and sites of public memory directly addressed to them did not exist, quite the opposite; as other minority groups, Mexican-Americans were forced to coexist with monuments that glorified, normalised, and symbolically perpetuated the injustices committed against minorities. Like many others, Judy Baca’s mother Ortencia grew up in this social environment. She lived in Colorado, in segregated housing and studied in a segregated school (Baca, 2003). Judy Baca was born in the neighbourhood of Watts, L.A, in a matriarchal family. As her mother, since a young age, she experienced this context of isolation and lack of community. At school, she had difficulties speaking English, and she often spoke Spanish to avoid the language barrier; a fact that she was reproached for many times. Unable to address this situation, the teachers have decided to leave her painting and drawing during the classes. With the encouragement of her art teacher she started practising painting at home and once finished high school finally decided to pursue a career as an artist. The struggle of being a Hispanic woman in the U.S, combined with her political ideals and artistic ethics, led her joining the Chicano movement. 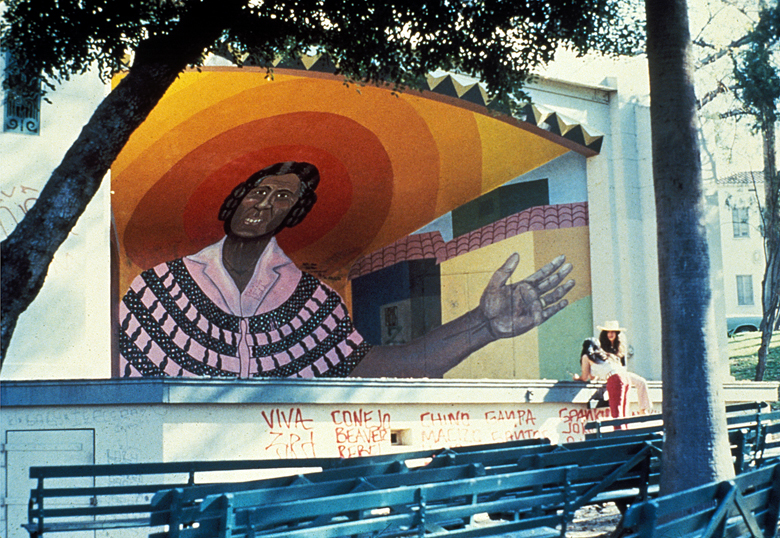 Judy Baca’s Mi Abuelita (1970) is, as most of her other works, a mural. The choice of this as her main medium of expression clearly indicates her idea of art and its role in society. According to her, this choice was forced by the social circumstances around her: if she wanted to create socially responsible art that empowered her people and gave them a sense of community, it had to be of easy access, public, and not locked in galleries and museums (Neumaier, 1981). Mi Abuelita was painted on three walls of a stage in Hollenbeck Park, L.A. It portrayed a Mexican-American grandmother with her arms outstretched as if to give a big and warm hug. An old photograph of Judy’s grandma was used as a basis for the creation of the mural; in fact, she was a fundamental figure in the artist’s life. Judy Baca grew up in a female household where her grandmother had a prominent role. She was the only one in her family that didn’t speak English and had strong attachments to her indigenous culture (Baca, 2001). In the words of the artist, this work, besides being an intimate portrayal dedicated to an influential relative, also “recognised the primary position of the matriarch in Mexican families as a reflection of our indigenous roots” (Baca, 2001).

She painted the mural in collaboration with young members of two rival gangs in L.A, introducing a new community-based approach to creating public art. By the end of the sixties, L.A. was bursting with social tensions. After the Watts riots of 1965, the Chicano Moratorium march, and other episodes of violence or protests, local authorities thought that the idea of an artist working with two rival gangs was risky and could trigger more violence. Nevertheless, Judy Baca carried on with her project, conscious of the rightfulness of her mural. Given these conditions, she was forced to meet with the participants at night to paint (Neumaier, 1981). She even included lookouts in her team to warn them of the arrival of the police. In spite of her carefulness not to be caught, one day an officer showed up. Even though what she was doing was illicit, the officer was so impressed with the project that she was granted a formal permission (Latorre, 2003). Once completed, the work was a total success: everyone loved it and related to it, and for over 12 years people would go to place flowers and light candles in front of the mural. (Fallon, 2014)

In A Short History of Photography, Walter Benjamin refers to cities as “crime scenes”. He asks himself: “Isn’t every city inch of our cities a crime scene?”.(Benjamin, 1931,22). What this work and its story seem to remind us about is how important it is to slowly remove inches of “crime” from our cities and creating through art, viable alternatives to the monuments in the service of oppressive and violent power structures. With the recent developments in U.S politics and the on-going debate about the semiotics of problematic monuments; it is still urgent to look, believe and support works in the same spirit as Mi Abuelita, works that clearly show the potential of art in conciliating situations of conflict.