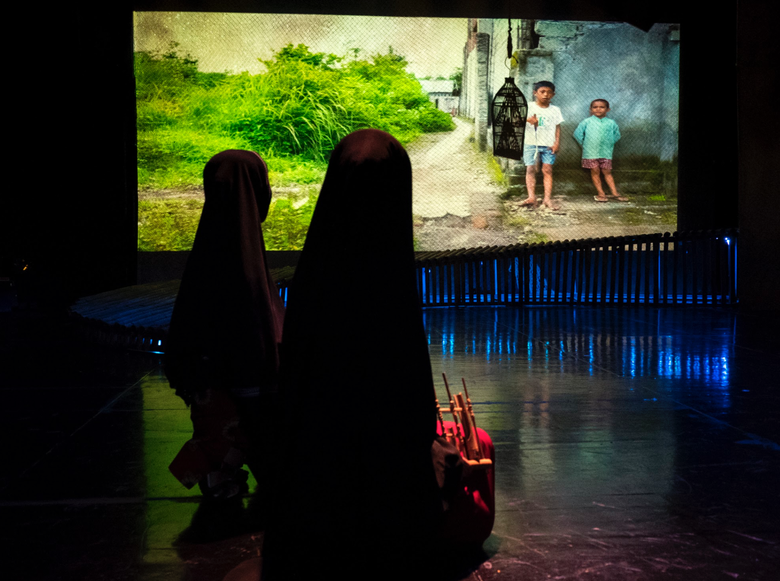 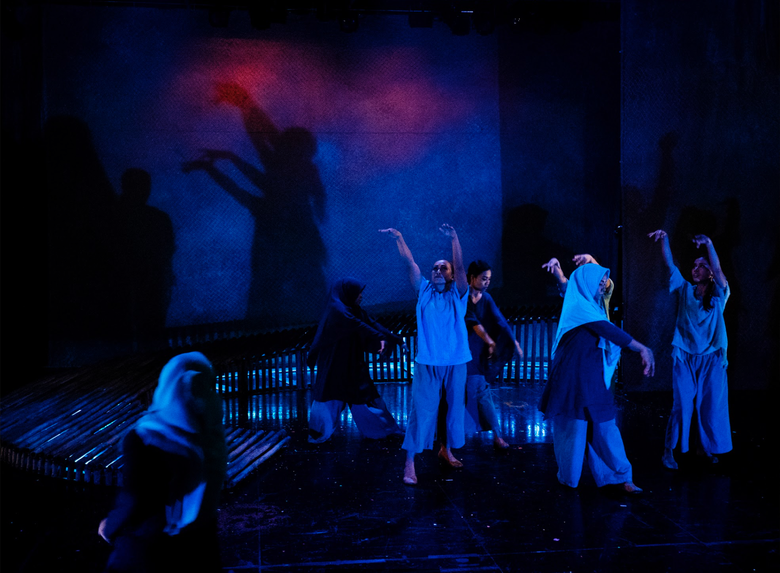 Performance involves agency in the body (cf. Butler, 2015), and agency in theatre refers specifically to a capacity, which enables individuals to become creative constructors of knowledge rather than passive receptors of external actions (cf. Wright, 2011:112). This ownership of construction on stage is also an important tool for empowerment, especially for those whose autonomy in life is limited and needs made invisible because they are in “places of pain” (Dinger, 2018).

Migration, a documentary theatre piece performed in the Macao Arts Festival in May 2018, produced by the non-profit theatre company Macau Experimental Theatre, puts this agency onto the bodies of a group of Indonesian workers in Macao. The official program describes the piece as not only about the “migration and settlement of Indonesian migrant workers”, which sounds easily comprehensible for the Macao public and adaptable into theatrical plays, but also “the love and woe of two generations of families”, which are stories and bodies of Indonesian workers themselves put onto stage for the genuine cause of liberating their voices.

According to the Labor Affairs Bureau (DSAL) in Macao, by July 2018, there are approximately 5091 Indonesian workers in the job market; in which 3593 are domestic workers and the remaining number are mostly workers in the hospitality and recreational service industries. Taking the concept of fish migration into its title, Migration explores the cycles of movement in between Indonesia and Macao these workers go through. It is the final production of a three-year Community Arts Project supported by the Cultural Affairs Bureau in Macao. It starts as a movement workshop presentation called Our Own Story in 2016, and is developed into an outdoor community performance called Our Bodies in 2017. At all the stages of this project, Macau Experimental Theatre aims to provide a means of artistic expression, in this case, theatrical and performing arts, for the Indonesian workers to tell their stories and reach the public, so as to break that general stigmatized impression of southeast-Asian foreign workers and create an awareness on their working conditions and struggles among the Macao community. To achieve this, they adopt the methodology of using the skills and trainings offered by a local artistic team (a producer, a director and a choreographer) while leaving the stage for the Indonesian workers to perform dances, movements, dialogues, poems and songs about snippets of their lives using their own bodies and cultural items such as costumes and music.

Before entering into the theatre, the faces of the performers are projected onto a screen at the reception, orienting the attention of the audience to the Indonesian workers themselves rather than the arts event. The set of the performance is minimal, consists of a bamboo slanted platform and some drapes of patterned cloths from Indonesia hanging from the ceiling, which bring the right amount of elements into a humble performance space with Indonesian connections. The piece in eight short scenes of five to ten minutes each is based on the stories of three case subjects and performers, with whom the team has been working with in numerous interviews, workshops and fieldtrip researches. It starts with the performers singing Indonesian nursery rhymes at a delightful pace until the atmosphere becomes heavy when they perform a card game and have to respond to the fate designated by the card they pick. The stories of these performers than unfold with their responses. A performer goes on with a monologue on her migrating history with relevance to different time periods in Indonesia (1990’s corruption and rapid inflation, 2004’s Tsunami, 2014’s series of monsoon flooding) shown through beans gathered and scattered on the stage floor, accompanied by real footages shot by the team in her village, telling the random but helpless conditions she has faced during the disasters and economic downfalls in Indonesia. 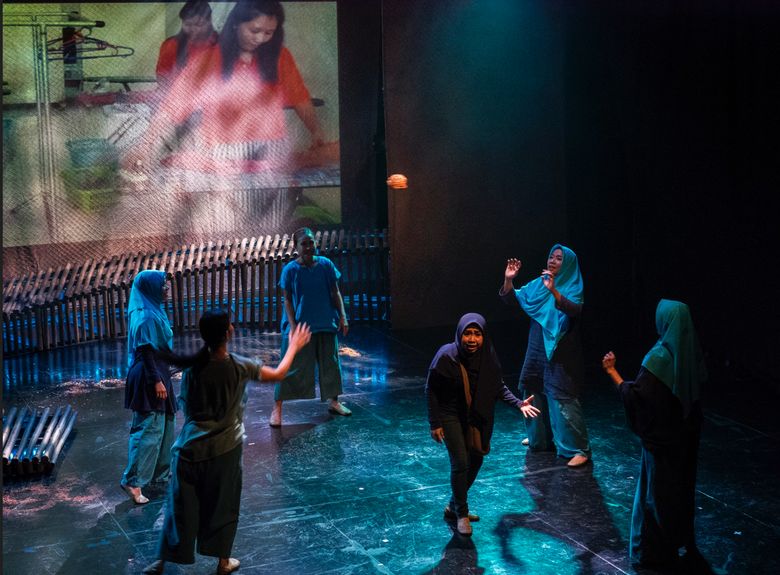 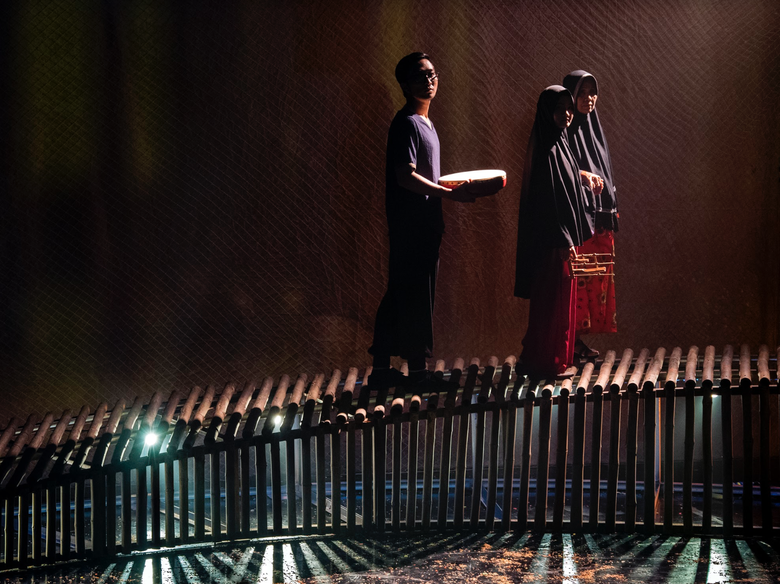 A number of group dances follow. Performers move like fish in the same swimming pattern within conflicting currents. They look repressed and their paths congested even though their moves are easy and natural, just as they are caught in between leaving their families with guilty feelings and taking care of a foreign family for money. Later on, the performers dance with their own suitcases and each tells a story about a personal item inside it, which somehow serves as a container for their emotions, needs and love for their family, waiting to be heard by someone who is willing to understand. Towards the end of the piece, the mother and daughter of a performer go on stage with her and read the correspondences they have had when the performer was away from the family. It is a scene showing an inevitable loss of family connection, loneliness, misunderstanding and sorrow, but also a scene of therapeutic openness and reconciliation among the three generations. The last scene is a reflection of whether these performers would travel to work again if they could. The answers vary and sound temporary, which actually return to problematize this migration phenomenon in Macao.

The director and playwright of the performance, Nicole Wong, wants to explore three main questions through this performance - why these workers travel to work in Macao, how their choices influence the different generations in their families and whether they would choose to work in Macao if they could choose again. While the general Macao society tends to associate Indonesian workers with laziness, noises, cheating, and roaming in public spaces, the stage seems to be the space for another perspective from the audience. These performers are no more a default household tool under presumptuous judgment, they return to their original identities as a mother, a daughter, a wife, and a travelling generation as a result of economic breakdowns and an incomplete social welfare system of a foreign city. Their bodies in life are no longer used merely for travelling and domestic work, and their bodies on stage do not only present problems such as gender inequality, corrupted economic systems, racism, and cultural differences etc.; these bodies create for themselves an outlet for their strong emotional needs and hope for a better life through the performance. A performer says on stage, “What changes can we make with only our bodies?”, another performer responses, “This body is our only chance.”

These stories of someone regarded afar and below may seem irrelevant to the local Macao audience but the performance is chosen into the program of the most prominent arts festival in Macao. The two sessions of performances received full houses of audience unexpectedly, composed of both local people and members of the Indonesian community. This means something more than opening up the usually local theatrical space to a different culture and raising awareness towards an unattended social issue - it is an act of acceptance and integration for a voice of someone close to you but unheard. After three years of project development, BoBo Leong, producer of Migration, reflects that the performers are more empowered, become more eager to invite their employers and friends to watch their performance, and feel valued when their stories receive feedback and their traditions are being appreciated. This may have been what motivated the team to keep up with their weekly rehearsals even though the performers always have long work hours and the local team has to face with very packed production schedules. 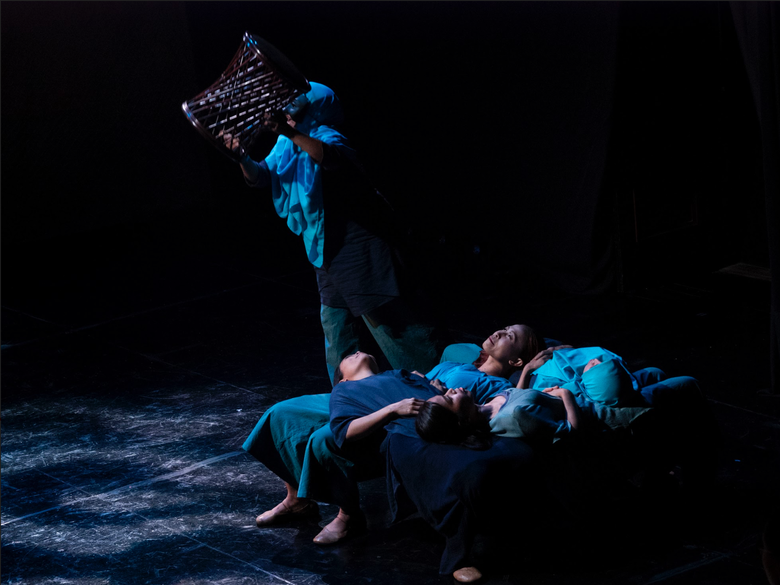 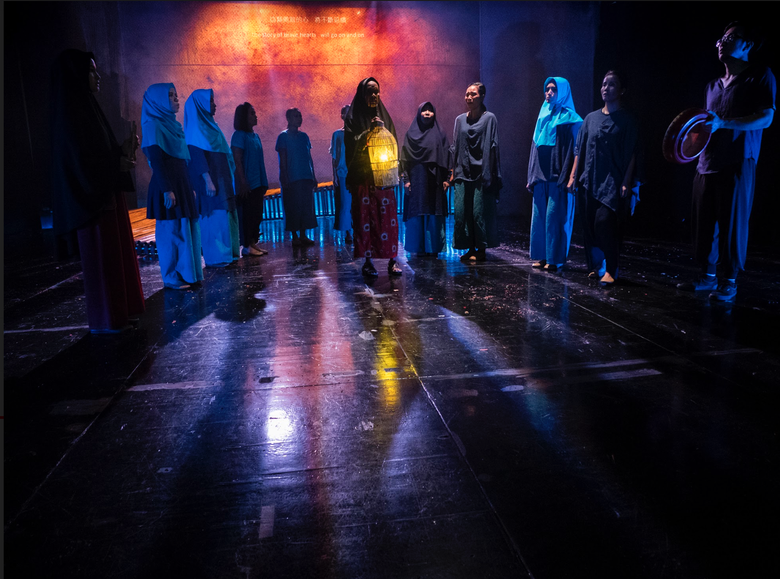 The piece is documentary in a sense that it uses information gathered from interviews and researches as the backbone of the plot, clips recorded in the workers’ families in Indonesia as projected elements on stage, and traditional rhymes, card games, dresses or family items, such as baby socks or musical instruments, as significant items to generate artistic connection with real life. When everything is that genuine and exposed on the stage, the shock and sorrow the audience receives can be an epiphany and thus a possible compassion in them can be resulted. However, this also brings the question of whether the amateur performers are well prepared for such exposure and whether it is therapeutic or abusive to use their emotions and traumatic experience repeatedly in the process. There is no definite answer for a controversial topic like this and how this can be measured against the positive influences performers and audience brought home from the project will never be known.

Extending this idea of using performing arts to give a voice to other stigmatized but needy communities may help build conviviality where conflicts exist, such as helping with the living conditions of refugees in Europe at the moment. According to McGregor and Nora (2016), refugees demonstrating their cultural identities through art can boost integration, raise their voice against discrimination, and create therapeutic settings for processing traumatic experiences. In Portugal, the government has already received 1674 refugees until 2017 (UNHCR, 2017); in 2019, it will have received 1010 more refugees in accordance with an UN Refugee Agency program (Jornal de Negócios, 2018), which indicates increasing concerns on the needs of refugees in Portugal. This uprising problem should also be studied through qualitative approaches. There have been reports on high rejection rate of asylum-seeking applications in Portugal (Cordeiro, 2018), lack of community and family support due to discontinued approval of asylum-seeking families (Cordeiro, 2018; Santinho, as cited in Jurriaans, 2017), and inadequate welfare structures to support integration into the Portuguese community (UNHCR, 2013). To address these issues through art practices with careful and ethical considerations, hopefully, can allow the emergence of a “place of listening” (Dinger, 2018) amidst all the places of pain.

Dinger, Ana (April 12, 2018), “The Role Theatre Can Play in the Emergence of “Places of Listening””, HowlRound. Retrieved from http://howlround.com/the-role-theatre-can-play-in-the-emergence-of-places-of-listening (accessed 27 August 2018).

McGregor, Elaine and Ragab, Nora (2016), “The Role of Culture and the Arts in the Integration of Refugees and Migrants”, European Expert Network on Culture and Audiovisual, Retrieved from https://www.merit.unu.edu/publications/uploads/ 1473335881.pdf (accessed June 8, 2018).