La Biennale di Venezia remains, after 58 editions, a suspended dimension where multifaceted perspectives dialogue, interact and collide in the picturesque setting of one of the less-visited area of the Venice lagoon. La Biennale d’Arte is divided between Giardini, which host the pavilions of the participating countries, and Arsenale, where the International Art Exhibition May You Live In Interesting Times takes place. Ralph Rugoff (New York 1957), curator of the exhibition, focused his work on putting together a multiplicity of points of view, “holding in mind seemingly contradictory notions, and juggling diverse ways of making sense of the world”1. In his curatorial text, he continues highlighting that ‘order’ nowadays takes shape in the simultaneous coexistence of manifold orders, in which a variety of responses constitutes our controversial and complex reality.

Deep See Blue Surrounding You / Vois Ce Bleu Profond Te Fondre, Laure Prouvost’s (Croix 1978) solo exhibition at the French Pavilion, appears to be going in the same direction. Curated by Martha Kirszenbaum (Vitry-sur-Seine 1983), the show is presented as a journey in a fluid and seductive world. Prouvost shapes a reality based on multiple fractures as pretexts of distance, between generations, neighbours and strangers, different languages and social roles. At first, the impossibility of communicating constitutes a source of misunderstanding and resignation, represented by an unmoving sea where objects of consumption, technological devices, and vegetal and animal bodies are stuck together in a light blue solidified magma. The front doors of the pavilion are shut: Prouvost believes a path to a shared future exists, but it is not a long-established one. It is labyrinthine, tentacular, oneiric and at times obscure. 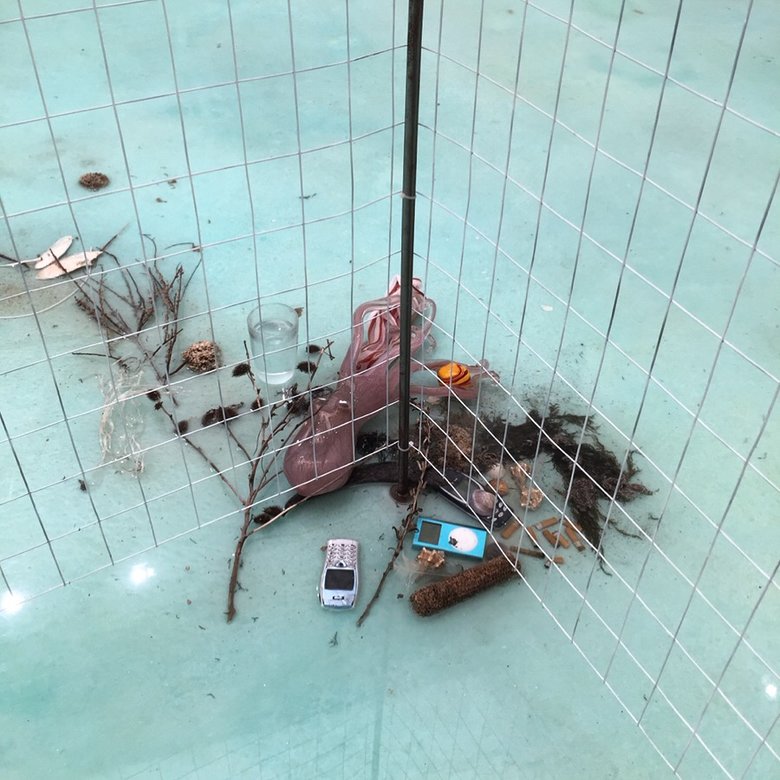 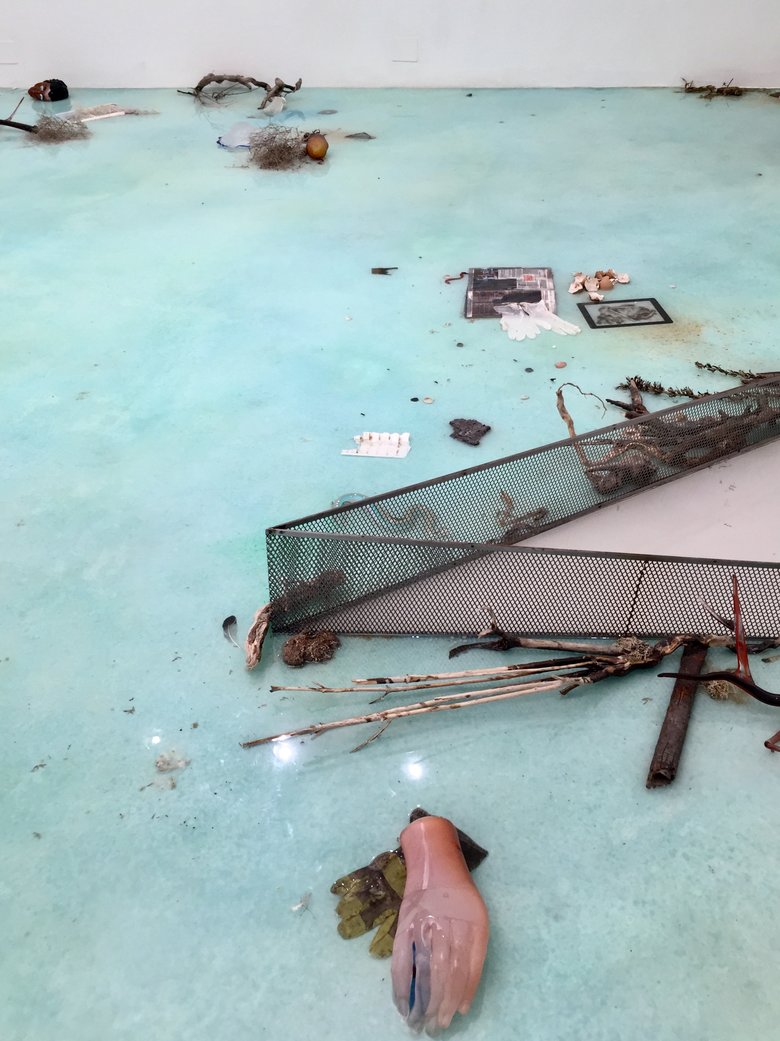 The introductory bright azure room, as a represented paralysis of our times, gives way to a dark underwater scenario which hosts the corner-stone of the exhibition. The fictional film They Parlaient Idéale (2019, 28 minutes 30 seconds) deals with a physical and metaphorical journey through France. From the suburbs to the coastline, Prouvost experiences and represents via a multitude of media (from singing and speech to dance and magic) the possibility of building a system where discrepancies are nothing but opportunities of sharing. In this framework, she challenges Bauman’s (Poznań 1925) liquid perspective on our times claiming that modernity is instead a fluid commonality of distinct contingencies. This ailleurs idéal is a place to get lost (together), form the delightful and insidious Mediterranean Sea to Venice, the city which has been able to be founded upon water for centuries.

Here, Prouvost imagines and experiences an initiatory road trip that leads her to find a more inclusive and convivial somewhere. As a contemporary Holden Caulfield, she comes across differences of every sort, which are collected in a polymorphic symphony that embraces differences of origin and generation. Vois Ce Bleu Profond Te Fondre is a surreal immersion in which we would like to stay longer. At the end, the two parallel ways out are suspended opportunities to play with contrasts and words. Mixed materials compose a collection of faces, dry plants and wordplay which surrounds the visitors till a fountain adorned with three fishes announces that the dream is over. The bright light of the outside recalls the audience to the real world and the crowd of Giardini. 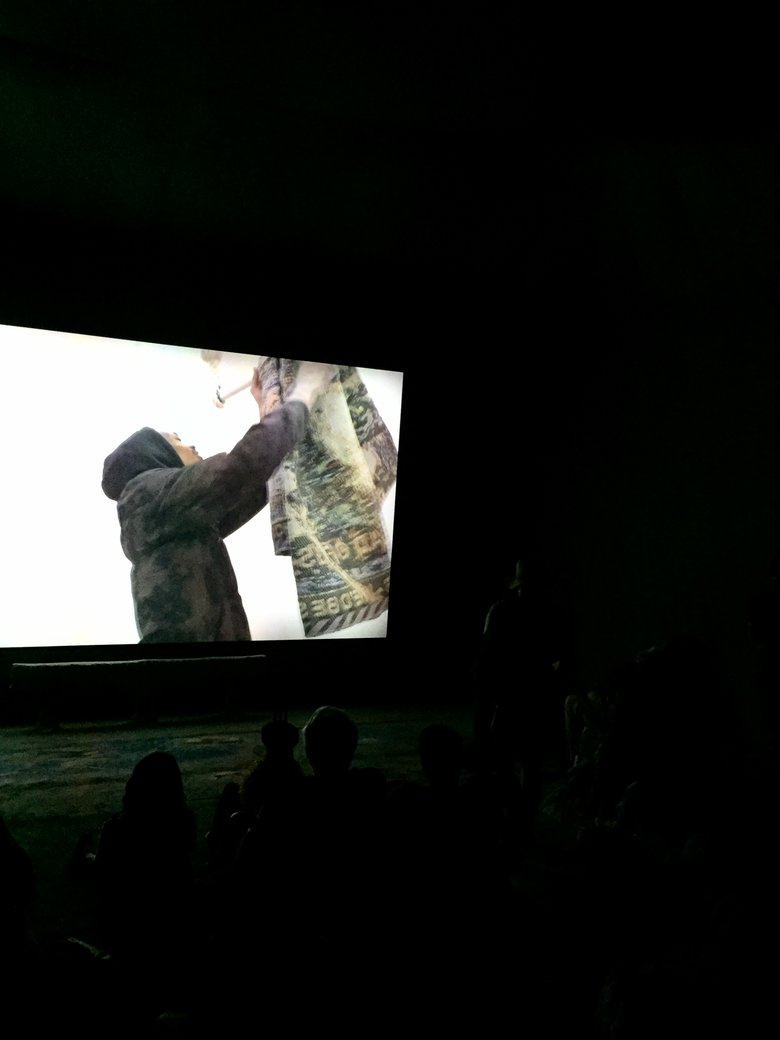 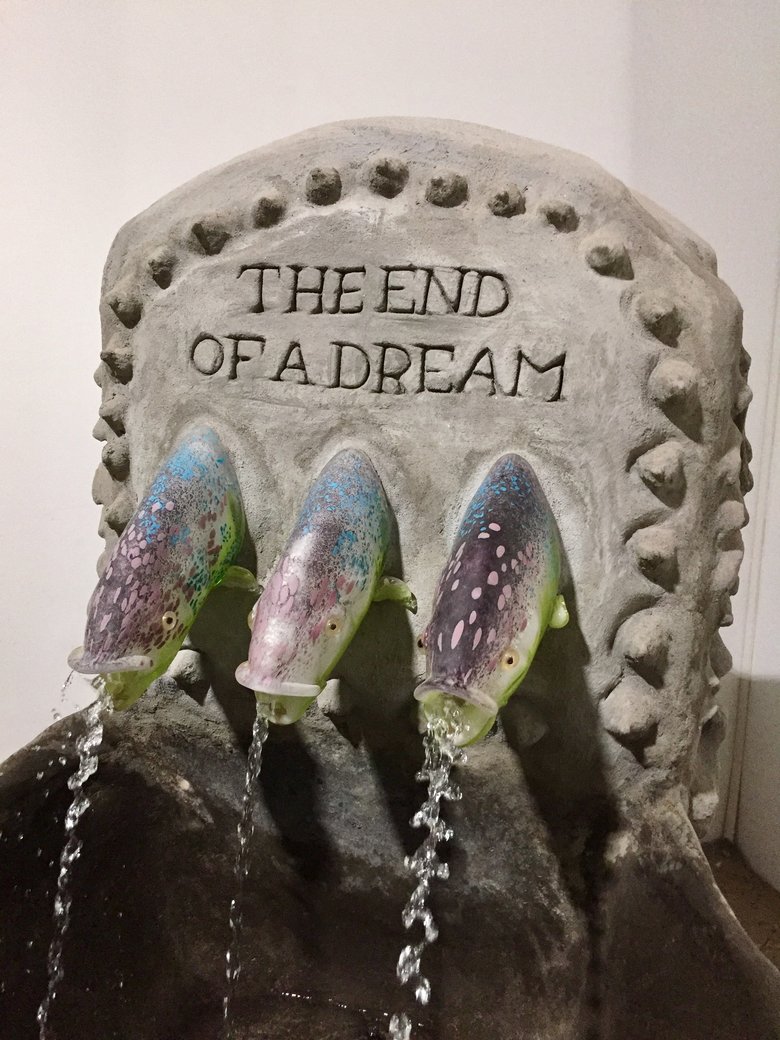 The blue exhibited by Laure Prouvost is the colour of a bright possibility. It is an aquatic dream where a utopian society is able to breathe. Like her previous work, the pavilion is a whole embracing experience which involves the public as a constitutive part of. The rooms are entirely submerged by the artist’s will of building a shared opportunity, to such an extent that the way out brings with it a sense of nostalgia for the world we just left - wishing that blue could surround us again.

Federico Rudari is a Master student in Culture Studies – Literary Cultures, at Universidade Católica Portuguesa. He holds a BA in International Studies from Università degli Studi di Trento, during which he specialised in contemporary sociology and anthropology as a visiting student at Université Paris 1 – Pantheon Sorbonne and Universitat de València. Rudari’s interests in research focus on the representation of social and cultural phenomena, both as forms of artistic expressions and in the way they are cognitively perceived. Due to his interest in programming and curating, he also developed and produced different events, conferences and film forums in Italy and Europe.