Amidst the global spread of the coronavirus, the impressive rise of infection and death tolls, and the vertiginous spiral of news, comments and posts, we find ourselves in an uncomfortable position: we try to make sense of a situation that developed too fast, even for our fast-paced societies and changed fundamentally both our individual lives and the existence of our communities as we have always known them. What is the meaning and what are the implications of this pandemic? Much has been already written about this and much more will flow. But from where we stand today, on March 22, 2020, a few impressions can already help us draw a provisional balance.

This is not a war

It is not uncommon for politics and the media to refer to crises as wars. It helps frame the situation and concentrate efforts on fighting a cause, the more so as this cause is a living organism with an identity: Sars-CoV 2. This rhetoric however may be as misleading as when it was used in the aftermath of September 11, when war on terrorism was declared. Although the enemy has better contours now – a virus –, when President Macron says we are at war he does so to justify measures to control citizens’ social behaviour, rather than to fight the virus. Politics can do just that: make hard decisions to ensure the common good. The virus is up to doctors and scientists to fight: doctors fight for their patients, scientists search for ways to fight the virus. The powerful metaphor entailed in “this is a war” may also fuel reactions such as hoarding (notoriously of toilet paper and pasta) in Europe or stocking up guns in the US. Neither are good means to kill a virus, but both lay bare fundamental differences in the way these two societies are built. In Europe, the collective experience of war clashes with the consumption and hedonistic economic models of the post-war period, but in both, we may find a justification for the impulse, the reflex to stockpile. In the US, citizens are buying guns out of fear of other citizens, who have always been chronically disadvantaged and who in a crisis mode might be tempted to claim what they feel is righteously theirs. The two interpretations of the common Western neoliberal organization are evidently different. This difference will ultimately decide who lives and who dies, but in different ways: in Europe because of shortage of resources (medical and human) in result of successive disinvestment in common infrastructure in favour of more appealing sectors of the economy; in the US because of unequal access to medical care.

In any case, the situation we are currently living is a pandemic, not a war. And if one should insist on the metaphor, it is useful to think of Syria, where the corona meets an actual war that has raged for 9 years, no end in sight.

Much of the fear this pandemic is causing results from the attempt to understand a natural phenomenon in cultural terms, or rather, the inability to accept nature for what is it, and rather insisting on controlling it by the means of culture. This has been the hallmark of civilization, intensified since the industrial revolution of the late 19th century and enhanced by more recent technical and technological advances and the intricate and fast connections of a globalized world. The wish to challenge and overcome nature has been more prevalent in the Western world, but it is common worldwide. Control means going beyond nature-imposed limitations, taming and surmounting them. Humanity has done this as it developed new agricultural techniques that allowed to move from nomadic to a settled existence; when it ingeniously created housing and production techniques that made life possible in extreme inhospitable corners of the planet; when it shrank distance by inventing faster means of displacement; when it discovered means to face plagues and epidemics. Nature succumbed to culture, but only so much. And in natural catastrophes (leaving out those caused by human action, such as Australian bush fires or Mozambican floods) we are powerless in observing their consequences: the earthquake and tsunami in Southeast Asia in 2004, or the ash cloud following the eruption of an Icelandic volcano in 2010. Such catastrophes cannot be prevented or accurately foreseen and they can have devastating consequences for cultural ways of life and for life itself. In face of these catastrophes of nature, culture is left to manage their consequences and prevent the extent of their impact when they happen again. Because they will. A plague, epidemic or pandemic is one such natural catastrophe, whose dimensions are set by the ride a virus takes on civilizations’ means: the swiftness in propagation owes to omnipresent travel.

Much of the helplessness we feel results from this illusion that culture has succeeded in taming nature. The sense of control we experience more and more, as we develop means to monitor every aspect of life, clashes with the sudden experience of being at the full mercy of a phenomenon we do not know well enough to overcome successfully. And the uncertainty that looms in the future is suddenly overwhelming.

From loneliness to solitude

Among the many images that circulate to illustrate the effects of isolation and confinement, two are particularly striking. One is the sight of an empty highway, a German Autobahn crossing forests and mountains, built-in times when progress was synonymous with fast mobility, now deserted and rendered to irrelevance. There is something absurd about an empty highway.

The other image circulated on the web and showed a version of Edward Hopper’s Nighthawks in the age of the coronavirus. This image is striking, as it upgrades the loneliness in Hopper’s painting to a heartbreaking abandonment. In this new version, there are not even persons, subjects to the experience of loneliness; the viewer is left with that experience himself. We are not invited to see how others feel lonely, we are forced into loneliness. But is this an accurate depiction of the isolation we are confined to or of the feeling it generates? 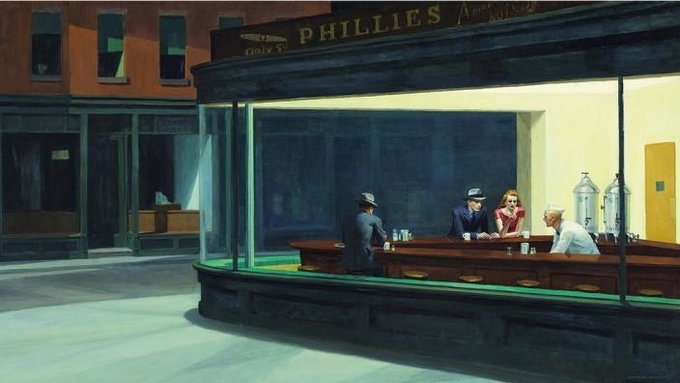 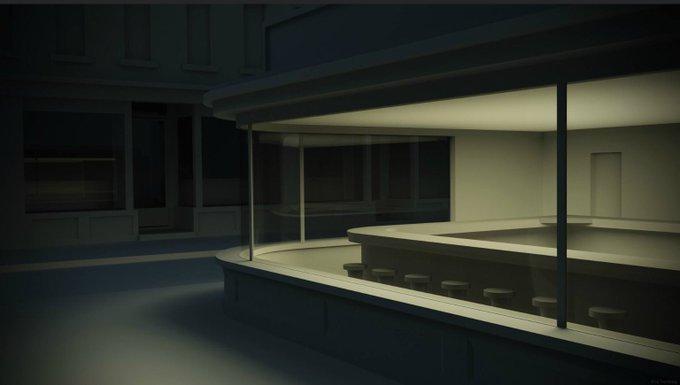 Much has been written about the consequences of forced isolation. Some say that people who have always been alone, who have had the feeling of not belonging or being left behind in the spiralling fast-paced society, will see this feeling enhanced: an older person living alone can no longer go out and talk to a neighbour or shopkeeper; a schoolchild from a poor neighbourhood has no computer let alone Wi-Fi at home to follow school activities; a single mother working shifts at a store feels left alone after losing a job she cannot do remotely and being left to care for and homeschool her child.

Others write that exactly such situations prompt neighbours, communities and local politicians to search for solutions, all relying on the capacity for solidarity. And others focus on the sudden standstill as occasion and opportunity to reconnect with family and friends, both out of concern for others or the need to know what they think and to make sense together of an entirely new situation.

Be as it may, we are definitely calling, skyping, e-mailing much more and much longer with family and friends, while work-related calls and messages are receding to what is actually essential. Suddenly, the same media that was doomed as the cause of all malaise in human relationships is the lifeline that ensures our connectedness. And in this forced physical distance we find other ways of proximity that make us shrug at the corona version of Hopper’s Nighthawks. Its loneliness contrasts with the feeling that exudes from Hopper’s paintings, which are in fact not about loneliness but rather of solitude, that experience of learning to know and to cope with oneself so as to find our own stand vis à vis reality and to cherish conviviality, once we can practice it again. Never did we have this collective chance to be alone. We were never so alone together as we are these days.

In a matter of a few days the coronavirus has forced us to slow down in ways we didn’t think possible at the pace society was going. A few weeks ago the scenario we are currently experiencing would be at most a good stage for a dystopian novel. And yet slowing down was probably a collective yearning that we didn’t deem possible, out of fear of the severe disruption it could bring. Yet we are now slowing down as a society, together. There is no one unaffected by this situation. And while it finds its parallels in history and in literary imagination (cholera afflicting Venice in Thomas Mann’s novella, or the pest in Albert Camus’ novel) this fast-paced pandemic is entirely new in our experience, even in the recall of the elderly, who still remember the Asian flu of 1956-58 or heard in their lifetime direct reports of the Spanish flu of 1918. What is new about the corona pandemic is how societies and governments are prepared to face it, not willing to stand and watch, helpless as the virus swipes through the globe. Regardless of the criticism of various responses, all over the world, we are forced to slow down by decree. Suddenly politics makes decisions that it kept postponing, for instance in matters of the environment. Even if in Europe the collaboration failed as each country decided on its own, in the end, states are necessarily concerted in their action out of sheer need.

Trying to make sense of the current situation and its impact in the present is seconded by the question of what the consequences of this crisis will be in the future. The surge in measures to cushion the expected hard impact of the economic paralysis gives hope for a return to a well-known normalcy. At the same time, it warns of the ineptitude to take a unique chance to reinvent an economic system based on growth at the cost of accelerated dynamism, global dependence and perpetual availability. “Forced de-acceleration” is the term proposed by German sociologist Hartmut Rosa to describe the current situation. Without yet knowing what this slowing down will make of us and of life as we know it, it could at least be seen as a chance. To question the real need of permanent availability of people, of things, of experiences, to consider the possibility of living with less, proving that also in lifeless may, in the end, be more.

Perhaps the fifth of the four Cs is not yet change, but the chance to imagine it possible.