With Eric Baudelaire, Chto Delat and the Otolith Group, curated by Azar Mahmoudian

Phrases have been appearing repeatedly across the domain of contemporary art in recent years: commonality, solidarity, and camaraderie – as responses to political and emotional urgencies – while the emancipatory movements of the 1960s and 70s are being revisited.

In those decades, universal left movements served as a backbone in inter-connecting emancipatory struggles all around the world, with the Soviet-style socialism operating as a monolithic node. A shared imagination of a utopian society was seeping through massive self-authorized translations of Marxist texts and stories of decolonization. When committed art was discussed in Santiago, Victor Jara cassettes were played in Tehran, Soviet murals were getting another temperature in Algiers, and Dziga Vertov Group was filming in Palestine.

But what brings us together now to rethink camaraderie, after the collapse of ideologies, post-revolutionary catastrophes, and the exhaustion of the Left’s discourse – castrated by reduction to gestures in the virtual space of social media?

Is it the basic instinct of survival? Or it is just a nostalgic move, the desire of a generation for a past it has not experienced, and coming to terms with the failure of its parents?

Feeling more and more paralyzed in getting a sound grasp of our time –  in realizing what exactly we are dealing with in recent years - the fetishization of a past, or of a future, seems like a safe exit point for the psyche.

Perhaps now there is no more than a dystopian landscape in front us which brings us together; almost the literal image of death, which necessitates a shared understanding of the science-fictional world we are already living in - in the rise of neo-reactionary authoritarianism, accelerated planetary wars and ecological disasters.

This program is a collection of moving image practices, including documentaries, films that employ fiction, as well as archival and web material. It is a look into how artists depict various spatiotemporal modalities that define our understanding of “the collective body” -– the genesis of a “We”. The selected works recompose the core notions that produce shared experiences, meanings, and contexts -– not only within the structures of identity, citizenship, or class, but also within bonds, longings, and commitments emerging from instincts of hope, anger, death, love, or regret.

While reflecting on filmmaking as a collective process, the program presents certain moments of interaction between politics and cinema, where artists brought radical imagination to action in various ways. On the other hand, the notion of “conviviality” is reflected on in relation to the ambience of cinema and audience effect, especially when the immersive experience of collectively watching the big screen is now becoming more and more extinct and replaced by the solitary and isolated experience of monitor screens.

This requires particular attention to the historical capacities of film as a medium as well as a physical and mental environment, a refuge, which creates situations for collective contemplation among a group of strangers and cultivating common grounds in time and space.

As part of the EU-funded project 4Cs: From Conflict to Conviviality through Creativity and Culture (2018-2019) and Tensta konsthall’s multi-year inquiry the Eros Effect: Art, Solidarity Movements and the Quest for Social Justice.

An artist talk based on the film project Slow Orientation in Zapatism,

Eric Baudelaire: The Ugly One

Made from a story told by Masao Adachi and set in Beirut, The Ugly One  revolves around the emergence of memories, a struggle to piece together the fragments of an unsure past: an act of terrorism, an explosion, and the disappearance of a child. Woven throughout these fragments is the deep voice of a Japanese narrator who recounts his own experience of a weeping Beirut, and his 27 clandestine years fighting alongside the Palestinians as a member of the Japanese Red Army. Following The Anabasis of May and Fusako Shigenobu, Masao Adachi, and 27 Years Without Images (2011), this is Baudelaire's second collaboration with the Japanese New Wave filmmaker Masao Adachi, whose "landscape theory" (fûkeiron) has also informed Baudelaire's most recent project Also Known As Jihadi (2017). Part love affair, part political tale, The Ugly One is also a confrontation between two generations of politics and filmmaking, exploring the question of militancy and regret.

As a backdrop, a changing Beirut, the ghost of a disillusioned Lebanese communist movement, and the specter of an intractable civil war in Syria — political impasses that are mirrored by the narrative impossibilities upon which the film is built.

Eric Baudelaire is a Paris-based visual artist and filmmaker. Exile, revolution, landscapes, and memory are recurring themes in his research-based practice, which also includes printmaking, photography and publication materials that have been shown in installations alongside his films. With a background in photography and social sciences, Baudelaire often approaches his subjects via a collaborative setting, one which is made of different formats of correspondence. He draws parallels between certain sociopolitical circumstances and the specificities of the film as a medium, hence constantly revisiting the aesthetic legacies of various histories of radical filmmaking.

In the Sixth Declaration of the Selva Lacandona by Zapatistas in Chiapas, and some other documents as well, the idea of Zapatistas’ embassy was introduced– which urged its participants to go out in Mexico and beyond to deliver the message of Zapatista. The idea of encuentros (horizontal meetings) with local people would help both to share information about the Zapatistas' movement and to collect reports on the struggle against neoliberalism worldwide. The New Dead-End Street #17: Summer School of Orientation in Zapatism (2017) is based on the idea of anticipating this embassy, which has not yet arrived to Russia. The collective Chto Delat organized a long-term program for getting deep in the ideas of the Zapatistas, which culminated in a two-week summer school where 17 young people shared a house in the countryside and experienced community building within a temporary commune.

The film reflects on the process of being together, on how the Zapatistas' way of life could be practiced and questioned outside of their indigenous context – eventually, it is to ask how we as Europeans/Russians, with all the weight of our political and cultural histories, could imagine a change in our lives and society. Realized in the Zapatista tradition of anti-culmination, and with a great deal of irony of the Zapatistas, well-known from the texts of Subcomandante Marcos, those who are depicted in the film participated in an investigation into the meaning of progress, how to live in harmony with the earth, and the ramifications of the famous Zapatista slogan "For everyone, everything. For us, nothing" (Para todos todo, para nosotros nada). 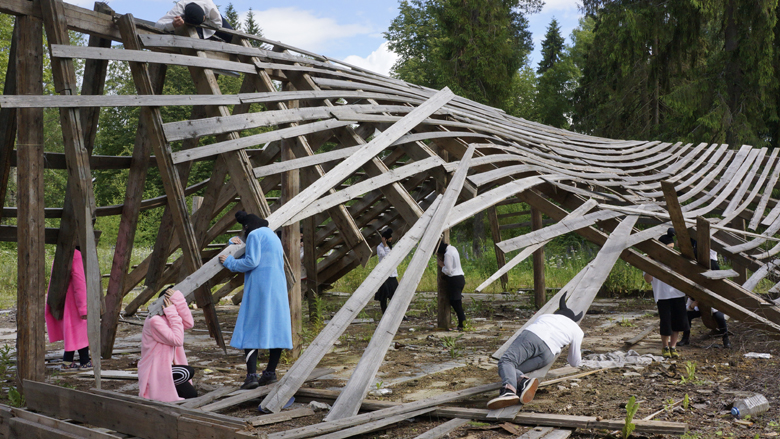 The collective Chto Delat (What is to be done?) was founded in early 2003 by a group of artists, critics, philosophers, and writers from St. Petersburg, Moscow, and Nizhny Novgorod with the goal of merging political theory, art, and activism. The name of the group derives from a novel by the 19th-century Russian writer Nikolai Chernyshevsky, and immediately brings to mind the first attempts by workers in Russia at socialist self-organization, which Lenin articulated in his own publication “What is to be done?” (1902). Chto Delat sees itself as an artistic cell and also as a community organizer for a variety of cultural activities intent on politicizing knowledge production.

The Otolith Group: The Third Part of the Third Measure

The Third Part of the Third Measure is a two-channel video that creates an encounter with the militant minimalism of queer African-American avant-garde composer, pianist, vocalist, and conductor Julius Eastman. From the late 1960s until his death in 1990 at the age of forty-nine, he wrote and performed compositions whose black radical aesthetic revolutionized the East Coast new music scene of the 1970s and 1980s. Eastman himself once described this aesthetic as “full of honor, integrity and boundless courage.” However, no recordings of his compositions were released during his lifetime.

In January 1980, Julius Eastman was invited by the Music Department at Northwestern University, Evanston, Illinois, to present his compositions Crazy Nigger (1978), Evil Nigger (1979), and Gay Guerrilla (1979) at the Pick-Staiger Concert Hall. A number of African-American students and one faculty member at Northwestern University objected to the titles of Eastman’s compositions. The titles of Eastman’s compositions were redacted from the concert program printed by the Music Department. Before the concert, on 16 January 1980, Eastman delivered a public statement that responded to these objections. The speeches delivered by Dante Micheaux and Elaine Mitchener in The Third Part of the Third Measure are based on each performer’s modified verbatim transcriptions of Eastman’s Northwestern University statement. This film is focused on what The Otolith Group describe as an “experience of watching in the key of listening”, invoking political feelings of defiance and the collective practice of movement building that participates in the global struggles against neo-reactionary authoritarianism. 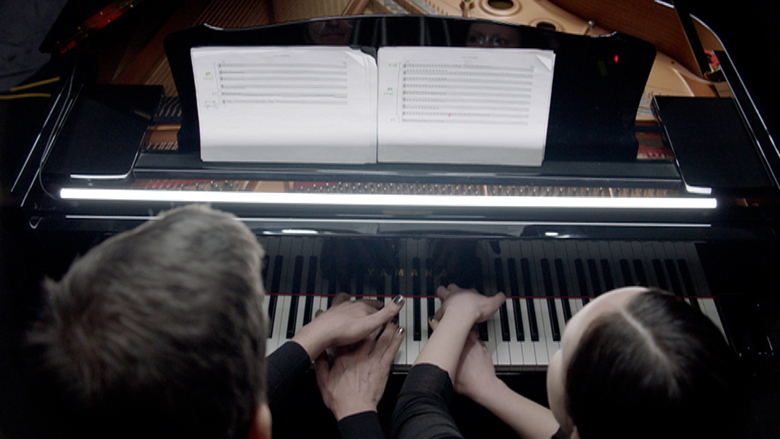 The Otolith Group, The Third Part of the Third Measure (film still), 2017

The Otolith Group is a collective and organization founded by Anjalika Sagar and Kodwo Eshun in 2002 that integrates film- and video making, artists’ writing, workshops, exhibition curation, publication, and the development of public platforms for the close reading of the image in contemporary society. The group's work is formally engaged with research-led projects exploring the legacies and potentialities of artist-led proposals around the document and the essay film, the archive, the aural and sonic medium, speculative futures, and science-fictions. They live and work in London.

Azar Mahmoudian is an independent curator and educator based in Tehran.