THINKING OUTSIDE OF THE WHITE BOX is the Berlin manifestation of a "Conference in Shards" by Ayreen Anastas and Rene Gabri which is taking place in the framework of "Sensible Grounds" – a multi-chapter program of moving image practices curated by Azar Mahmoudian.

"A Conference in Shards" develops through the film-world Black Bach Artsakh, and the urgency of addressing the struggle and the right to self-determination and independence of the Artsakh Republic. It emerges in the search for friends, concepts, terms, horizons, experiences which could respond to the impunity of nation-states directly involved in the Armenian Genocide. 100 years-long efforts of denial of the genocide could once again perpetrate acts of mass killing and ethnic cleansing under the same pretexts and distortion of facts used to conduct those initial crimes.

To share this search in Germany, a country which has played a significant role in the history of Anti-Armenian violence preceding, during, and after the Genocide, including the Nazi adulation of modern Turkey’s pursuit of “higher völkisch goals”, is to also revisit the structures and practices which continue to perpetuate the very racist, colonial, imperial attitudes which were able to justify that violence then and continue to ignore and thus be complicit with it now.

To share the film Black Bach Artsakh and this conference is to create the conditions for trans-communal processes of sense-making, solidarity and healing in defense of worlds and peoples marked for submission or erasure by supremacist states and relegated to oblivion or disposal by practices of whiteboxing.

The invitation to thinking outside of the White Box is not only a gesture towards thinking with struggles for abolition and the search for decolonial options; it is also to try to weave together communal experiences of sense-making and autonomy which do not look for recognition, acknowledgement, comprehension within the very terms of legibility which have rendered certain bodies at various points as expendable and at others as inhuman. Situating our conference in Berlin, how do we begin to address more fully the multiple inhumanities that Germany has been part of producing and continues to occlude?

And we could suggestively end these notes by continuing a line of thinking opened in a previous iteration of our conference by asking: In light of the relentless processes of planetary destruction, and this insistence to continue as before, on the part of those who inherit the wealth and power of the unsettled histories of mass violence; could we not amend the lucid theorization of the Zapatistas in the 1990s of the Fourth World War (both autonomous and self-governed communities of Artsakh and Chiapas are born in the embers the Third World War, the Cold War), in which they pronounce it as a war against humanity, by asking, are we not today more accurately facing a war against inhumanity?

Further texts relating to the conference, the concept of whiteboxing, and notes in preparation for this Berlin iteration can be accessed here:

Notes Toward a Theory of Whiteboxing

and through the conference's online publication.

"Conference in Shards" is taking place in the library/archive/cinema structure newly produced by the Sensible Grounds program and designed by SAVVY Contemporary to host the event. The hybrid structure of shelves, benches and screens has been conceived as a material and conceptual environment to situate collective and participatory reflections around and through Black Bach Artsakh; it is also conceived as a proposal for a sustainable exhibiting infrastructure that can remain and resonate further in time, reconnecting aspirations for trans-communal processes of sense-making, solidarity and healing the artists are calling for. This archive made for and of moving images, presences, books, and people stands as a momentum against erasure and silence, binding prosopographies and agencies in its kaleidoscopic complexity. The collection of books within this structure is a loan by Arjun Appadurai.

SCREENING AT ARSENAL
18.12.2021 ㅤ14:00 ㅤBlack Bach Artsakh by Ayreen Anastas and Rene Gabri, Armenia 2021, 150mins, Armenian/English (Complimentary tickets will be provided for registered participants of A Conference in Shards)

VISIT  The event will take place in presence at SAVVY Contemporary as well as streamed online. To participate physically please register here. 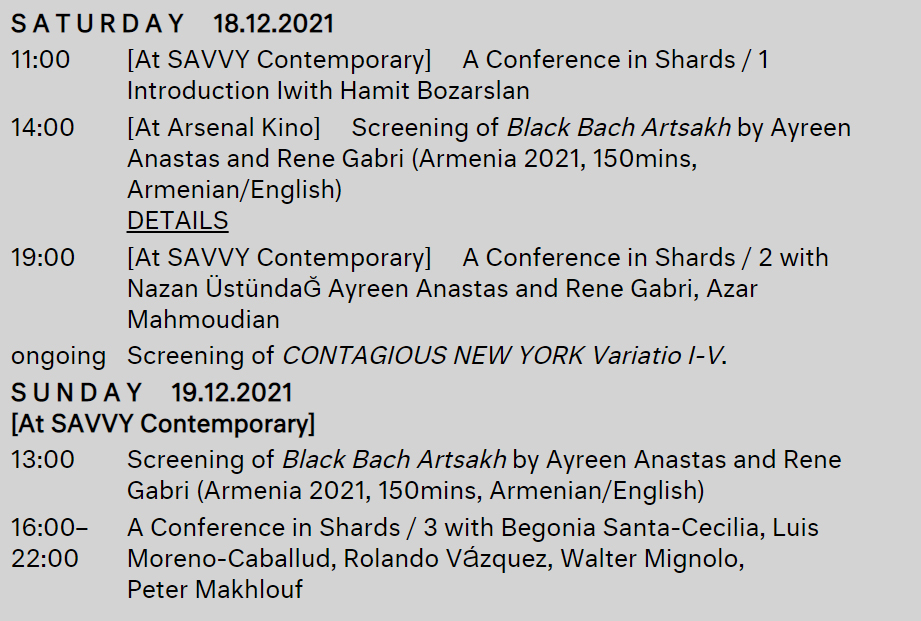