The Black Lives Matter (BLM) movement gained momentum in 2013 in the United States of America in the aftermath of the 2012 assassination of Trayvon Martin, a 17-year-old African-American. The acquittal of George Zimmerman, accused of murder, incited a wave of antiracist protests organised around the hashtag #BlackLivesMatter, a motto coined by three black women, Alicia Garza, Patrisse Khan-Cullors and Opal Tometi. Gradually, the Black Lives Matter movement materialised into a growing national network of protests opposing racially motivated violence against black people. By the end of May 2020, following the footage of the murder of George Floyd in Minneapolis, demonstrations supporting black lives reached unprecedented international visibility.

The mobilisation prompted by the murder of George Floyd had a remarkable global impact, contributing to a growing articulation of anti-racist agendas in different national contexts. In addition to police violence against black people, these agendas denounced the discriminatory structures of social and economic injustice, as well as the representations - monuments, museum collections or toponomies, among others - that celebrate the colonial past and the legacies of slavery. 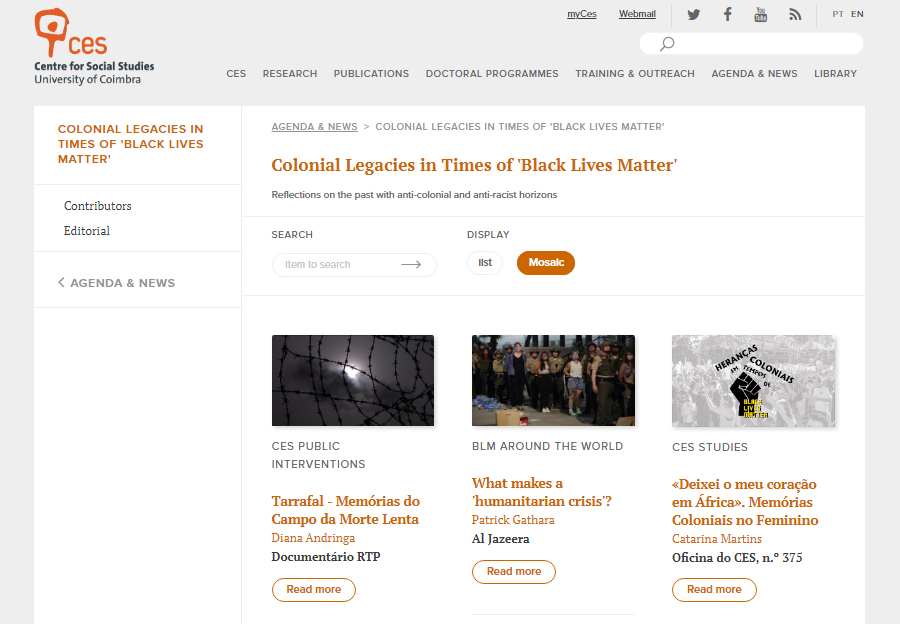 This Special Issue focuses particularly on the disputes over the colonial past engendered by public protests calling for the removal of statues, the restitution of museum works, the changing of street names, the reformulation of school curricula, as well as the need for historical contextualization and responsibility capable of remedying the omission of colonial violence in contemporary memorial landscapes. The removal of the statues of Robert E. Lee, Cecil Rhodes, Christopher Columbus or Edward Colston are some of the most mediatic examples of protests that have gained new impetus and visibility with the transnational notoriety of the BLM in 2020. At stake is the recognition that the colonial legacies and racist structures around the world are far from having been overcome by the abolition of slavery, anti-colonial and national independence struggles, the civil rights movement or the end of apartheid. Despite major dissent produced by social protest and non-Eurocentric academic research, colonial structures and representations remain strongly based on national narratives reluctant to confront the racial violence that underlie the constitution of the modern world-system.

The Colonial legacies in Times of ‘Black Lives Matter’ special issue is promoted by the Presidency of the CES Scientific Board and aims to make visible the knowledges produced and the social struggles that combine reflections on the past with anti-colonial and anti-racist horizons. This Issue will include three separate sections: 1) CES Public Interventions, in which op-eds, newsletters and media contributions from CES researchers will be listed; 2) BLM around the World, a selection of opinion articles published in the international press; 3) CES Publications, in which some CES researchers will be invited to briefly present an academic publication of their own, dealing with this archive’s theme.

The Centre for Social Studies of the University of Coimbra is a scientific institution focused on research and advanced training within the Social Sciences and the Humanities, through an inter and transdisciplinary approach.