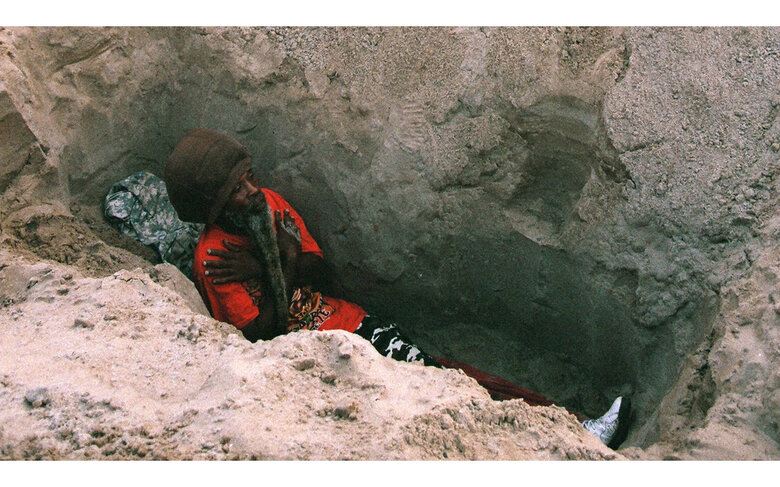 Gasworks presents a major new film commission by Brooklyn-based filmmakers Adam Khalil and Bayley Sweitzer. Acclaimed for their feature film Empty Metal (2018), a science-fiction political thriller set against a backdrop of racialised police brutality and mass surveillance, Khalil and Sweitzer delve into anti-colonial politics by weaving together indigenous histories and speculative imagination with a subcultural sensibility.

For their first UK solo exhibition at Gasworks, Khalil and Sweitzer will premiere Nosferasta, a Rastafarian vampire film starring and co-written by Oba, an artist and musician based in Brooklyn. Spanning 500 years of colonial destruction, human trafficking and blood sucking, the film reimagines Oba’s origin story. In the late 15th century, Oba is shipped as cargo from West Africa to the Caribbean, where he is seduced by the vampire Christopher Columbus, ensuring his undying allegiance to the colonial project.

As the centuries blow by, Oba and Columbus work behind the scenes, pulling the strings of ‘new world’ geopolitics as they spread vampirism across the Western Hemisphere. Combining film forms and genre tropes, Nosferasta examines the guilt of being complicit in imperial conquest, while acknowledging the extreme difficulty of unlearning centuries of vampiric conditioning. Ultimately, the film tackles an uncomfortable question: How can you decolonize yourself, if it’s in your blood? 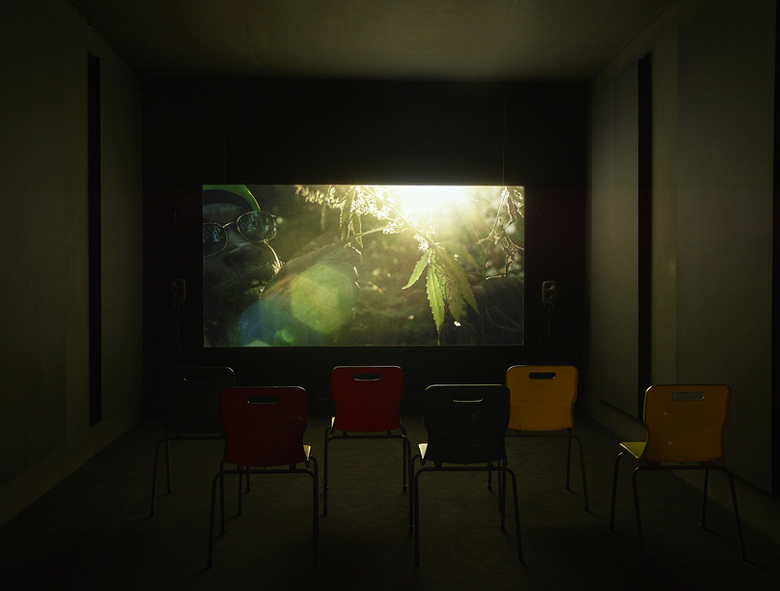 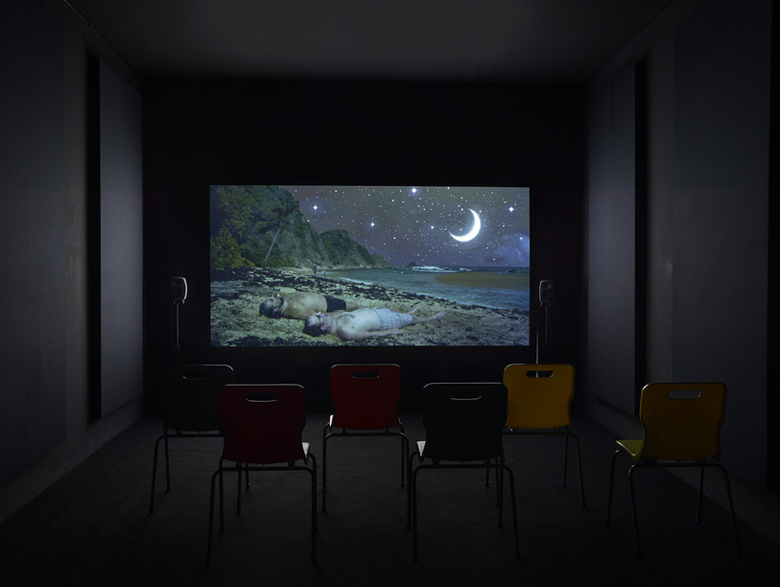 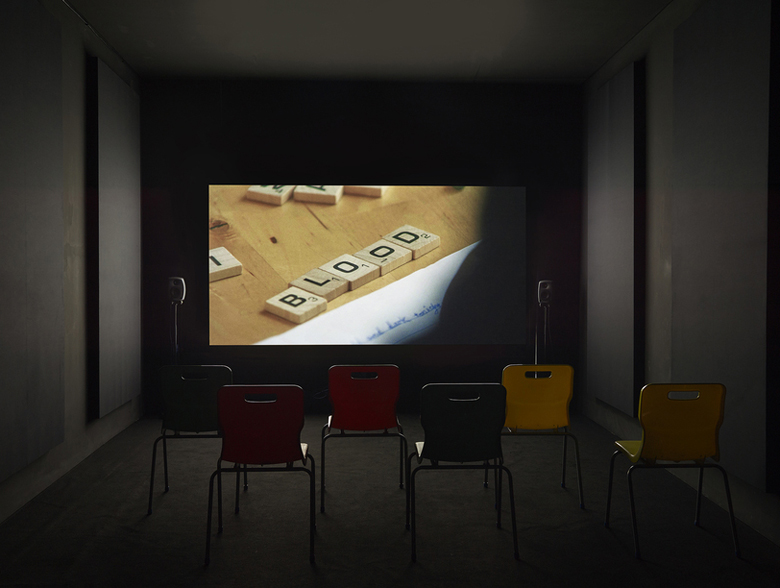 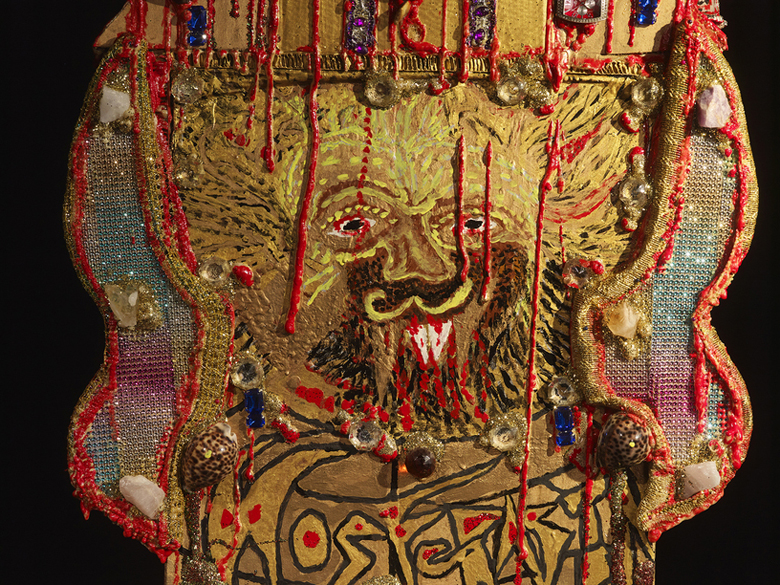 Adam Khalil is a filmmaker and artist from the Ojibway tribe in Northern Michigan; Bayley Sweitzer is a filmmaker from Southern Vermont. Recent screenings include the Museum of Modern Art, Anthology Film Archives, and e-flux (New York); Walker Arts Center (Minneapolis); LACMA (Los Angeles); and Tate Modern (London). Their work has also featured at international events including the Whitney Biennial, Toronto Biennial, Sundance Film Festival. Adam Khalil is also a core contributor to the indigenous collective New Red Order (NRO), for which Bayley Sweitzer acts as a regular accomplice.

Oba ‘the Artist and Musician’ is a multi-disciplinary artist and chef born in Trinidad. His paintings, sculptures and t-shirts have been featured at Motel Gallery and Rumplestiltskin, Brooklyn. He was lead singer of the avant-noise supergroup Dead Companionship from 2016-2018. Oba’s world-class corn soup has been slurped at the legendary Club Temptation in Flatbush, as well as fine establishments across the world.

Nosferasta is commissioned and produced by Gasworks, London and Spike Island, Bristol, as part of the European Cooperation project 4Cs: From Conflict to Conviviality through Creativity and Culture, co-funded by Creative Europe and the Royal College of Art. The film is also supported by Cinereach.

Gasworks is fully accessible for wheelchair users. A large print version of the exhibition guide is available in the gallery, or alternatively, you can listen to an audio recording of the exhibition information.

Please note - The film is approximately 32 minutes long and plays on a continuous loop.

Film scholar Erika Balsom presents a screening of 1990s films by Peggy Ahwesh, a major influence on Adam Khalil and Bayley Sweitzer. This screening coincides with Ahwesh’s retrospective at Spike Island, Bristol, and will serve to launch Ahwesh’s first UK monograph co-edited by Erika Balsom and Robert Leckie and published by Spike Island and Mousse Publishing.

Nosferasta collaborator Oba will host a live cookery show and artist’s talk that will address his sprawling practice as a sculptor, filmmaker, musician, actor, and chef, all the while making a big pot of his world-renowned corn soup. The live broadcast will be interspersed with music videos, images, trailers, and other video excerpts from Oba’s practice and collaborations with Bayley Sweitzer and Adam Khalil, as well as visits from some special guests.

Gasworks events are free to attend, no booking required. Please note that seats will be allocated on a first come, first served basis.