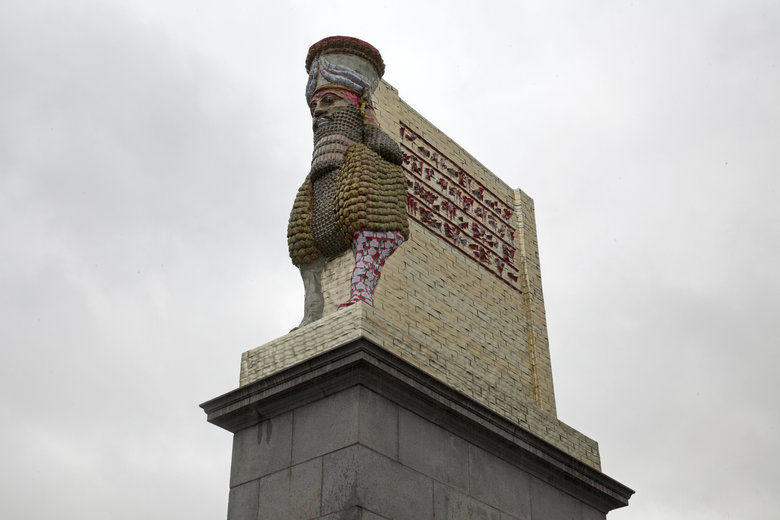 In a career commissioning art for the public domain since the early 1980s, I had a particular stroke of great luck, which was to be on the receiving end of a telephone call suggesting an artwork be found to fill the then empty ‘Fourth Plinth’ in Trafalgar Square. This was in 1995 and through the tenacity and determination of the caller, Prue Leith – then Chair of the Royal Society of Arts where I worked – the first artwork was installed at the turn of the Millennium, Mark Wallinger’s Ecce Homo. It had taken the agreement of nine august organisations to allow contemporary art to take up such a minute space of Greater London’s 1,572 square kilometres (607 square miles). An experience that made me, makes me, question the word ‘public’ when talking about the ‘public domain’ or indeed ‘public art’. Yet paradoxically the newest artwork on the Plinth really is public.

Twenty-three years from that first telephone call, the Fourth Plinth is now well established as a site for contemporary art, and this month saw its twelfth incumbent. Michael Rakowitz’s sculpture is part of an enormously ambitious, painstaking, ongoing project titled The Invisible Enemy Should Not Exist. With his studio and other collaborators, for over a decade Rakowitz has been reconstructing more than 7,000 artefacts looted from the National Museum of Iraq, or which have disappeared, following the 2003 invasion. This project Rakowitz reckons will take more than his lifetime (700 objects have been made to date). He sees these recreations as ghosts.

The Invisible Enemy Should Not Exist will be experienced by millions from every culture and ethnicity – tourists, city workers, early morning office cleaners, people visiting the National Gallery – all wind their way through Trafalgar Square. It has already had extensive international media coverage, and in its very creation this artwork has been an extraordinarily collaborative venture. Rakowitz, who radiates good humour and generosity, is quick to commend everyone who had been involved in the project to the point that at the celebration following the unveiling, his speech consisted almost entirely of naming literally every single one of the scores of people who had been involved. His gallery, the commissioners, the funders, the curators, the fabricators, the photographers, the publicists, the caterers, the people who are running the associated shop selling dates and other merchandise, most of all his family – and now us the public.

I realise I saw the very first objects in the series in an exhibition for Sharjah Biennial 8 in 2007. I remember Michael, whose mother is Iraqi, telling us about how war had affected the export of dates. For some time Iraq had been the world’s foremost producer until the crops were devastated by war, sanctions and climate change. Since 2003 Iraq has been sending its much-depleted cargoes of dates, an export reduced to less than a third from the country’s heyday, to be packaged and labelled in neighbouring Lebanon before being sold on the global market. The tins do not bear the name of Iraq on them, which seems especially tragic after all the country has suffered, and is still going through.

The work on the Fourth Plinth, which will be there for two years, is a life-size reconstruction of a lamassu, an ancient Assyrian winged bull with a human head that has been a symbol of both power and protection. Created in c.700 BC this creature guarded the gates of the ancient city of Nineveh for more than a thousand years, until destroyed by Daesh in 2015. This version of the lamassu is colourfully clothed in flattened date tins – specially shipped to the UK from Iraq for the sculpture – and thus tells a tale not only of ancient history, but of the Iraqi people, their labour, their economy, and the ongoing impact of war on civilian lives. At a recent event Rakowitz said the Lamassu is a placeholder for lost Iraqi lives … a purveyor of discomforts as well as the sweetness of the referenced dates. We have to keep our criticality and our discomforts alive.1

Trafalgar Square is full of military statuary that constitutes a triumphalist version of war. The Invisible Enemy Should Not Exist quietly questions this account, and is a potent reminder that conflict continues to be very present. This work, for all its historic references, is entirely, shockingly contemporary. A project to mark a loss of Iraqi patrimony.  It speaks to the wounds. We all have to mend the bridge somehow. 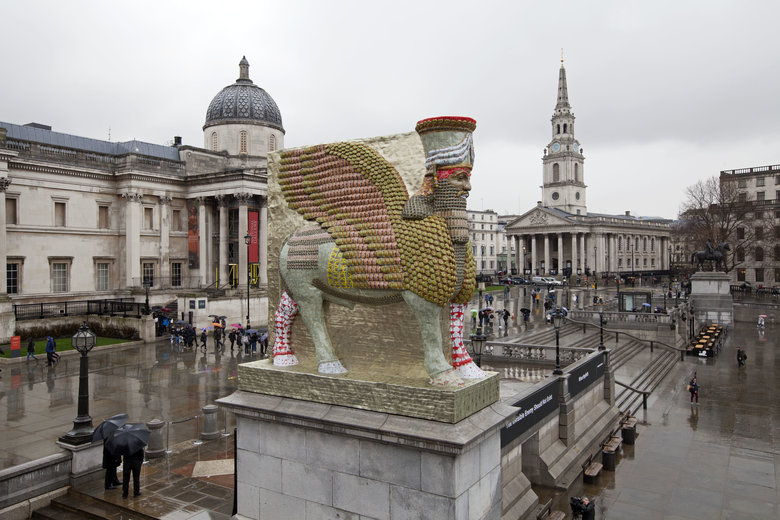 As reported in London’s Evening Standard, “It is an ongoing work … amid an atmosphere of deep animosity towards Middle Eastern refugees and immigrants … Every country seems to be suffering from the same disease of fear and of — once again — targeting the most vulnerable communities, who are fleeing for their lives. Immigrants, migrants, emigrés... these are the people who are being constantly placed in the crosshairs.” (The Evening Standard, 29 March 2018).

In all The Invisible Enemy Should Not Exist is an important spur for the 4Cs programme. For it to be ambitious, collective, critical – and perhaps most of all – to be constructive in its endeavours.