Do you know more than one language?

You’re invited to participate in a crowd translation of the English Language Unity Act.

The Act is open for edits on Google docs from now until 28 October 2020. You’re free to translate as much or as little of the text as you like, into whatever language you prefer. You can leave your translation as a suggestion on the document. 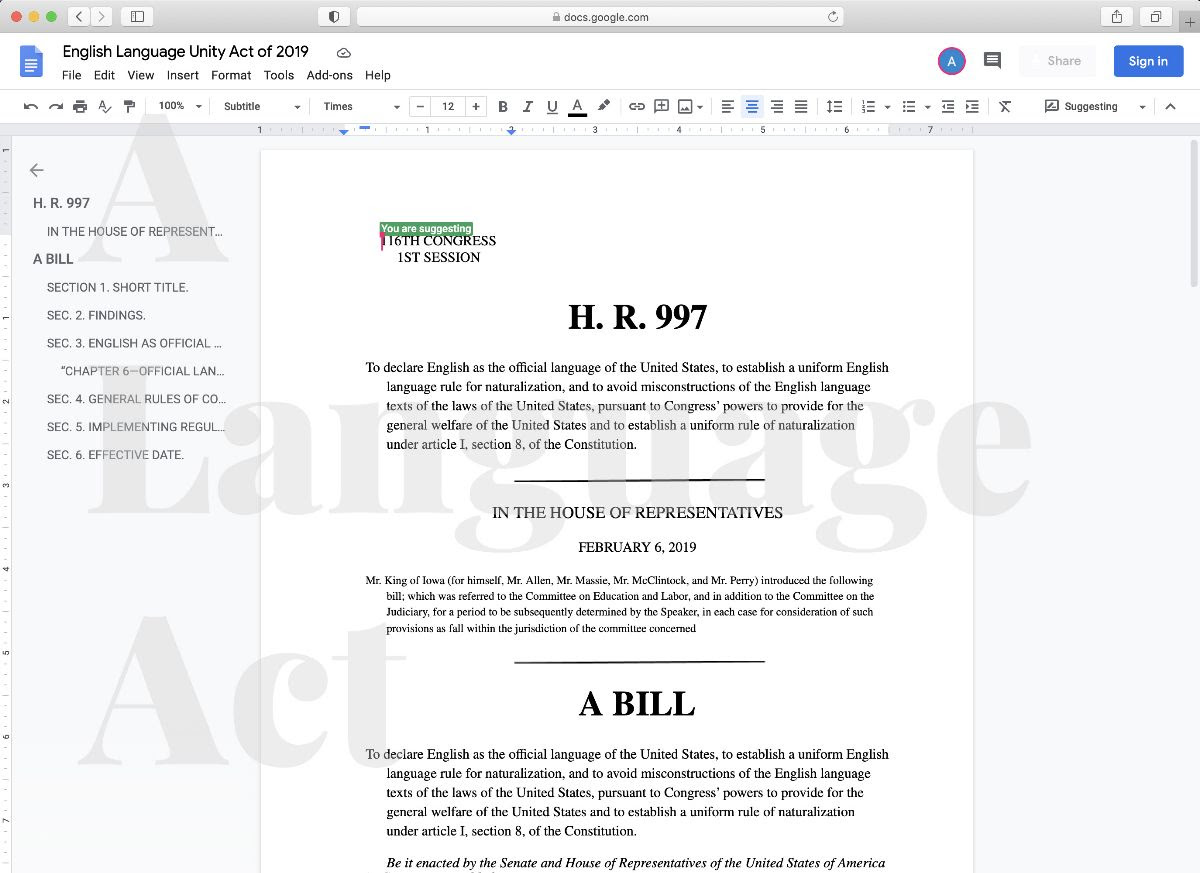 On Wednesday, 28 October, we’ll meet on Zoom to work as a group to finalize the translated text of the act. Sign up for the workshop and you’ll receive a link to join near the time of the event. Participation in the workshop is limited.

The workshop is part of the FarBar series, organized by the Richard and Mary L. Gray Center for Arts and Inquiry at the University of Chicago.

The bill was introduced to the House of Representatives by Steve King (Iowa) in 2005, 2007, 2011, 2017, and, most recently, in 2019. It is similar to an earlier piece of proposed legislation, the Bill Emerson English Language Empowerment Act, which was first introduced in 1996 and passed the House in 1999. It has never become law.


About the FarBar series

The Richard and Mary L. Gray Center for Arts and Inquiry is a forum at the University of Chicago for experimental collaborations between artists and scholars. Through its various programs, the Gray Center seeks to foster a culture of innovation and experimentation at the intersection of arts practice and scholarship.

Conceived as a way to maintain the ethos of their regular Sidebar series for the pandemic moment, FarBar is a vehicle for artistic and scholarly dialogue with practitioners from around the world. Throughout 2020-2021, their planned conversations with artists will revolve around translation, indigeneity, ecological and economic collapse, logics of extraction, crisis, and memory and the archive. Being online for the year will also enable the Gray Center to reach audiences well beyond their Chicago geography, so please invite your far-flung friends.

Amira Hanafi grew up speaking English, reading the Qur’an in Arabic, and getting cursed at bil masri. She is a poet, artist, and researcher, and the author of two books, several works of electronic literature, and a lot of short texts. She’s currently working with City of Asylum/Detroit, an organization that provides sanctuary residencies for threatened writers and artists in Hamtramck, Michigan, a city where over thirty languages are spoken. Amira holds US and Egypt passports and has made her home in both countries. Learn more about her work.